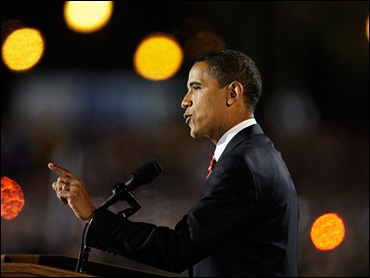 Barack Obama's decisive win over McCain signaled more than just the voters' preferred candidate; it offered valuable insights about the future of American politics. An analysis of the CBS exit polls reveals six key lessons from the 2008 presidential election:

Americans Want Change: Voters are clearly weary of eight years under the Bush Administration and want the country to move in a new direction. Three quarters of Americans said the country is on the wrong track, while 72 percent of voters disapproved of the job President Bush is doing. More than a third of voters desired a candidate who will bring about needed change.

Amongst all these voters, Obama was seen as the presidential candidate most capable of bringing change. Among voters citing change as the quality that mattered most to them, 89 percent voted for Obama. In contrast, voters were split evenly over whether McCain would continue Bush's policies or move the country in a different direction. Of the 48 percent of voters who said McCain would continue Bush's policies, 90 percent supported Obama, compared to 8 percent who supported McCain.

It's the Economy, Stupid: Voters think the first priority of an incoming Obama Administration is to remedy the struggling economy. Ninety-three percent of voters said the economy was not good or poor. Eighty-one percent of voters were worried that the current economic crisis would harm their family's finances in the next year. And, more than 6 out of 10 voters named the economy as the single most important issue facing the country.

More importantly, a sizable majority of voters believed Obama is better suited to turn around the economy than McCain. Among the voters who said that the economy was the most important issue facing the country, 54 percent chose Obama, compared to 45 percent who chose McCain. Moreover, among the 47 percent of voters who think financial conditions will get better over the next year, 61 percent voted for Obama as opposed to only 38 percent who voted for McCain.

Clinton Voters Came Home: The divisive Democratic primary between Obama and Hillary Clinton did not tear the party apart. In fact, Obama's ability to retain an overwhelming majority of Clinton supporters was a key factor in his victory over McCain. Among Democratic voters who wanted Clinton to win the Democratic nomination, 82 percent supported Obama. Moreover, among the 52 percent of voters who would have voted for Clinton in a hypothetical match-up against McCain, 83 percent voted for Obama.

Clinton's support during the primaries came disproportionately from a coalition of Hispanics, union households, low income voters, and white women, which frequently supported her by double-digit margins. In each of these cases, Obama was able to overcome in poor showings during the primaries and secure their support on Election Day. Obama won Hispanics 66 percent to 31 percent, won union households 58 percent to 40 percent, won low income (

Minority Voters Are An Electoral Force: The 2008 presidential election highlighted the increasing importance of black and Hispanic voters in the electorate. In numerous battleground states, Obama was able to score decisive victories among these groups and offset McCain's sizable advantage among white voters. As these groups continue to expand their share of the electorate, their impact should continue to grow.

The exit polls mentioned in this story were conducted by Edison/Mitofsky Research for the National Election Pool among 17,834 voters nationwide as they left the polls on November 4, 2008. The margin of sampling error for the survey is +/- 1 percentage point for the entire sample.

Samuel J Best is an associate professor of political science at the University of Connecticut. He has published a book and several scholarly articles on American public opinion and survey research. He holds a Ph.D. from the State University of New York at Stony Brook.