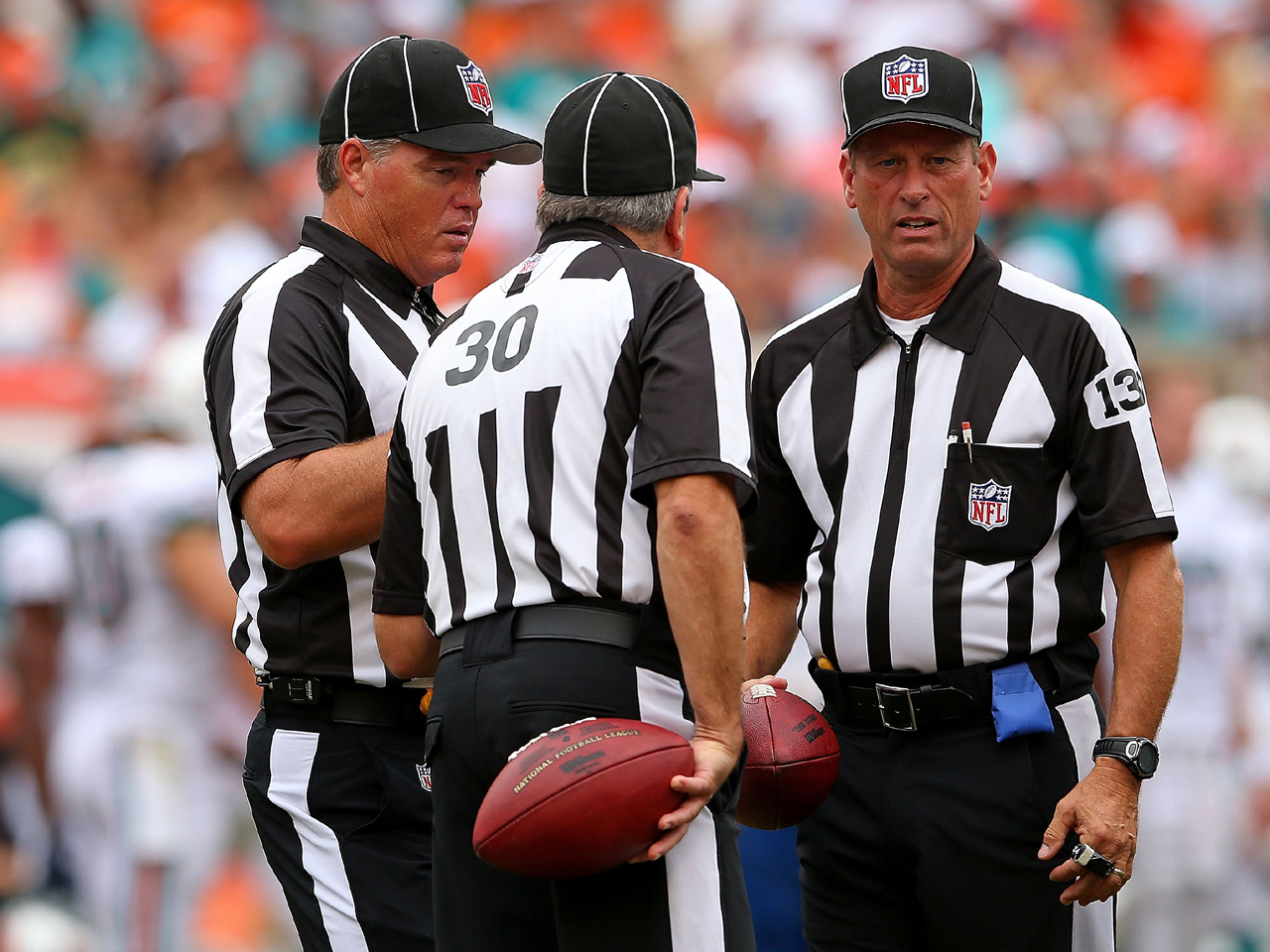 (CBS News) As the NFL season gets underway, pro football players and fans are watching the referees a lot more than usual. Why? The NFL has replaced regular officials who are locked out in a labor dispute, and the replacement referees have been making their fair share of mistakes.

All eyes will be on the refs Thursday night as the New York Giants take to the field against the Carolina Panthers.

Monday night, typically a showcase for the NFL, turned into something of a sideshow, explained CBS News' Jeff Glor, in a report that aired Thursday on "CBS This Morning."

Jerry Markbriet spent 23 years officiating in the NFL and spoke out about the recent events. He said, "It's a crime to let them officiate these games. The league says they are a doing a good job and they'll get better every week. My personal opinion is they will not get better -- every week they'll get worse."

That, after a slew of mishaps on Sunday: the clock running at the wrong time in a Bengals-Browns game, phantom pass interferences in a Steelers-Jets game, and one official pulled from a game at the last minute when it was discovered he was a New Orleans Saints fan about to referee a Saints game.

The league is not talking publicly but released a statement to CBS News saying, "officiating is never perfect. The current officials have made great strides and are performing admirably under unprecedented scrutiny and great pressure."

Some players have spoken out on the issue, including Philadelphia Eagles' Michael Vick, who said, "It's extra stress when you have to sit there and wait. The one thing you don't want to do, you don't want to put the game into the officials' hands."

The Baltimore Ravens' Joe Flacco told reporters, "The NFL always talks about the integrity of the game and things like that, and I think this is kind of along those lines. Not that these guys are doing a bad job, but the fact that we don't have the normal guys out there is crazy."

Don Banks, senior writer for Sports Illustrated, when asked if the players are right, said, "I think to a degree they are. It's a hard argument to make that the replacement refs offer you the chance to put your best product on the field for your fans."

The divide between the two sides is most significant over pension plans.The officials want to keep them whereas The NFL wants to shift to 401(k)s. Salaries are also an issue at hand, as officials, who earn an average of $149,000 a year, want more. But the increases being requested amount to .17 percent of the league's annual revenue -- $9.3 billion. So that's not all.

Banks explained, "It falls under the heading chump change for the NFL. It's really about control and I think the league feels like they want to make sure they maintain control over their refs. The pension issue is important, but I think this deal could get done with very little financial strain for the NFL. It's kind of remarkable that it's gotten this far."

Asked if either side overplayed their hand in this case, Banks said, "I think to a degree they both did."

As week three begins, the most successful operation in pro sports could face an increasing barrage of broadsides, fueled by the fear that a game's outcome may no longer rest in the hands of its players.

"The only way this will be settled is if the fans stop watching the games," Markbreit said. "People love their football, but as this goes on, and these officials make a mockery of handling the games, it's got to have some effect."

As of this writing, there are no scheduled meetings over this issue. The NFL has already drawn up a replacement ref schedule for weeks four and five, so it's unlikely the regular referees would be reached before then. Also at play here: the NFL wants to set up a referee pool of 21 refs that could potentially be brought in if the regular refs aren't performing well. The regular referees are balking at that idea.