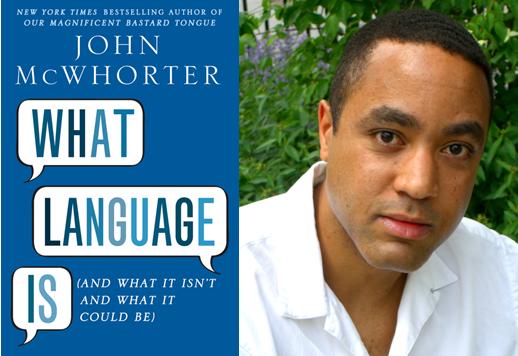 Jeff Glor talks to John McWhorter about his new book, "What Language Is (And What It Isn't And What It Could Be)"

John McWhorter: I am always surprised by how differently linguists see language than how non-linguists do. Roughly, it seems that for too many people, "real" language is writing, and "real" languages are ones that are written down, while speech is a kind of approximation of "real" language, and an unwritten language is a primitive "dialect." In fact, unwritten languages you've never heard of tend to be much more grammatically complex than English or French or Japanese. The world is full of neat languages in the same way as it's full of neat animals and plants. I wanted to get that across. Another issue is that most people see language as something that most people are doing wrong somehow -- introducing nonlogical constructions, allowing words' meanings to change. In "What Language Is" I try to show that all languages worldwide are messy and always changing, and that we should enjoy that instead of hoping language can ever be as cleanly logical as mathematics.

JM: That as I finished the chapters, people reading them seemed to like them better than almost anything else I've written. Genuinely -- I thought of this one as something that would get an argument of mine out there but strike many as a little odd. Much to my surprise there seems to be something about it that people like a whole lot, which makes me happy as this book is about exactly what a lot of my academic work over the past 10 years has been about.

JM: I'd probably be a musician, likely playing piano in cabarets and for regional theatre productions. Sometimes I wish I had taken that path, but usually not.

JM: Robert Caro's "Master of the Senate," his third volume of biography on Lyndon Johnson, David Anthony's "The Horse, The Wheel, and Language," which at last identifies exactly who the speakers were of the parent language to most of the modern languages of Europe, and an old German novel called "Irrungen, Wirrungen," about romantic troubles amidst old-fashioned class distinctions.

JM: I'm not sure just yet, but something tells me the proper book to write would be on the speech/written divide and the new nature of political discourse, or perhaps on changing conceptions of profanity. I also intend to do a shameless ripoff of Stephen Jay Gould and put together a book of mini-essays on language, likely in alphabetical order. I'm also told I should write a biography of Fats Waller, but we'll have to see about that.

For more on "What Language Is," visit the Penguin Group website.