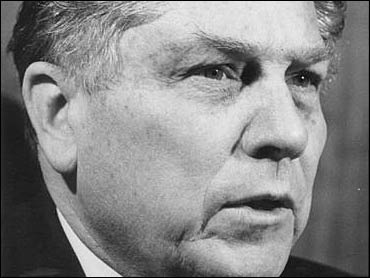 Walter J. Sheridan, a Justice Department official, told the Nashville grand jury in March 1963 that Hoffa's supporters planned to trap the agents in an alley "and have a bunch of business agents waiting for them."

The grand jury testimony came at a time when the Justice Department under then-Attorney General Robert F. Kennedy had targeted Hoffa for prosecution.

The plan was not carried out. The trial, on charges that Hoffa took payoffs from trucking companies, ended in a hung jury. But Hoffa was convicted two years later of jury tampering during the Nashville trial.

Sheridan quoted Ewing King, head of the Teamsters local in Nashville, as saying the ambush could be carried out under the pretense that the union members, referred to as "business agents," thought the FBI agents were robbers.

It's not clear from the transcripts how the Teamsters planned to lure the agents to the alley. The FBI, however, was watching King closely at the time and he knew it.

Sheridan told the grand jury the plan was never executed, apparently because the Justice Department discontinued surveillance of King. "If we had not, it could have been a very disastrous thing," Sheridan was quoted as saying. He did not elaborate in the transcripts on what such an ambush might entail.

The testimony also does not say whether Hoffa knew of the plan.

Sheridan's testimony led to Hoffa's indictment and conviction in Chattanooga two years later of attempting to bribe jurors during the Nashville trial that ended in a hung jury. He served four years in prison.

Hoffa disappeared in 1975 and his body was never found.

The transcripts were made public after a request by retired law professor William L. Tabac of Cleveland. He said he is trying to determine if the government used improper evidence against Hoffa during the Nashville trial.

Some of Sheridan's testimony was redacted by prosecutors before it was made public this month. The document cites privacy laws for removing names in several sections.

Sheridan testified that Hoffa and his associates had a list of the trial jurors and FBI agents had information about several attempts to contact the jurors directly or through their spouses. The transcript also says Hoffa's side was being assisted by a top official of the national Fraternal Order of Police, although that person's name is redacted.

Tabac, in a telephone interview, felt prosecutors at the time enhanced talk of the ambush plot.

"They racheted it up to make it sound like criminal misconduct," he said.

However, after reading the transcripts, Tabac said releasing them "added to the knowledge of what happened."

Hoffa was elected Teamsters president in 1957, a role he continued for years while in prison. He officially resigned in 1971 when his jury tampering sentence was commuted by President Richard Nixon.

Hoffa has been declared legally dead, and innumerable theories shroud his disappearance. Among speculation: He was entombed in concrete at Giants Stadium in New Jersey, ground up and thrown in a Florida swamp, or perished in a mob-owned fat-rendering plant. Searches for his body have continued sporadically this decade.

Under Hoffa's leadership, the Teamsters became a powerful national union and Hoffa an influential though controversial labor boss.

Now most of the individuals during the Nashville events, including Sheridan, are dead.

The Hoffa family and the Teamsters Union did not respond to two e-mails for comment. Hoffa's son, James P. Hoffa, has been Teamsters general president since 1999.