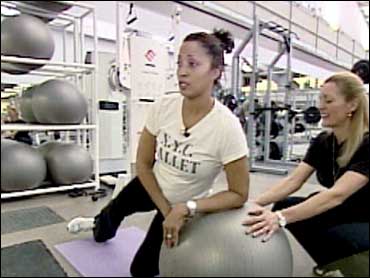 Anyone can tell you that losing weight comes down to diet and exercise. But probe further and you'll often get blank stares. The Early Show co-anchor Rene Syler went out on a fact-finding mission.

Her first question: How many calories are in a pound? Posing that question to a random selection of people, the answers she heard ranged from 50 to 1,000. The truth: There are 3,500 calories in a pound. Her next question: What does it take to burn a pound's worth of calories? For the answer, she went to see Dr. Robert Gotlin at the Center for Health and Healing in New York.

Dr. Gotlin told Syler that the first step is to figure out your steady state of calorie burning. "If a person is not losing or gaining weight, that's their steady state. So if you consume 2,000 calories, and don't gain any weight or lose weight, you're burning 2,000 calories. That's your starting point."

In other words, start with basic math. Calculate how many calories you're eating and subtract the number you're burning. According to Gotlin, a sports medicine specialist, the average person burns about 300 calories weight training and about 500 calories per hour doing most aerobic activities, including running, jogging, playing tennis and spinning.

Gotlin recommends using an expert to help figure out the numbers. "It's a balance point of what you're taking in and what you're losing. But you have to know the math. You've got to have someone guide you — a nutritionist, a physician, a clinician, anybody who knows the math."

Don't forget to factor in your age. "Age is a tricky business with this because it turns out, actually, that the reason age seems to be a problem is, as we get older, we require less calories to sustain ourselves," said Gotlin. "But we eat the same."

Syler decided to start crunching the numbers. "First, my weigh in: 135 pounds," she said in her report. "Next, I activated my calorie tracking watch and got moving. A 45-minute spinning class burns 685 calories. Not bad, since I do that at least twice a week, but still only about one fifth of a pound. After a training session, I had burned a total of 1,800 calories — more than half a pound in one day! But don't forget, I do have to eat."

And with some careful attention to her diet, Syler had some satisfying results. "I paid attention to my portions. I tried to log my meals, so I would know how many calories I ate a day — about 1,500, which is my steady state, although I'll admit to a few indulgences. And I exercised, burning off about 600 calories a day," she reported. "OK, I have a high-stress job that has me going at mach 10 from 4 in the morning, but the bottom line is that in about two weeks I lost 2½ pounds the right way."

The wrong way would be using crash weight-loss plans, which might work in the short-term, but that nearly always fail in the long run. "The biggest misconception I think is people think that if they just go on a crash binge diet, and lose that 10, 12 pounds in a short period of time, that they're done. They lost the weight, they're set. And almost always, always, within a month or two, the weight begins to creep back on.

"I think for a person who is trying to get into shape, who is not obese, not markedly overweight, just trying to cut down and get in shape, I think a goal of one to two pounds per week should be the max weight loss per week as a goal," said Gotlin.

For more information, go to the New York City Center for Health and Healing.