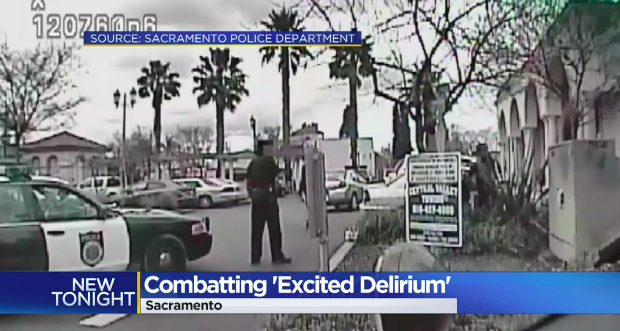 SACRAMENTO — Concerns about "excited delirium" were addressed during a meeting of the police review commission in Sacramento, California, Monday night. The Sacramento Police Department says it is training officers how to deal with people exhibiting signs of the condition, which is described as an agitated state that could make an offender violent, CBS Sacramento reports.

One incident happened earlier this year in the city near a drug store.

He was subdued with batons and a tasered; his mother claims officers almost killed him.

"It could've given him a heart attack and all of that was unnecessary. It was excessive, excessive force," said Debbie Hernandez.

Sacramento Police told the police commission Monday that those who exhibit signs of the condition appear to have super-human strength and are difficult to subdue.

"All these non-lethal things used on these subjects that we are dealing with, they're not feeling any pain," said Deputy Chief Ken Bernard.

"We'll see people who are beginning to disrobe, profusely sweating, acting erratically. These are kind of signs that we train our officers to look for," said Detective Eddie Macaulay.

Excited delirium — also known as agitated delirium — is not listed as a recognized medical diagnosis in the Diagnostic and Statistical Manual of Mental Disorders (DSM), the guidebook for psychiatric treatment. But doctors familiar with the phenomenon describe it as "characterized by agitation, aggression, acute distress and sudden death," often in police custody, before a person can get to the hospital. According to researchers from the University of California, San Diego School of Medicine, symptoms include "bizarre and/or aggressive behavior, shouting, paranoia, panic, violence toward others, unexpected physical strength and hyperthermia." They say it is often associated with stimulant drug use.

Some have raised concerns that the condition could be used as an excuse when an arrest goes wrong.

"It's almost exclusively used in police-force cases," Eric Balaban, senior counsel with the American Civil Liberties Union's National Prison Project, told the Washington Post in 2015. "There seems to be a high correlation between its use by medical examiners and in-custody deaths."

Macaulay said Sacramento officers have been trained not just to recognize the signs, but how to react.

"To get that person in custody to get them to the medical attention that could potentially save their life," he said.

A person experiencing the agitated state may see their internal body temperature spike above 103 degrees at times, and it can lead to cardiac arrest and death.

According to Sacramento police, excited delirium is related to one in-custody death, on average, per year in the city.

While it was never confirmed that Johnny Hernandez suffered from excited delirium that day, Debbie Hernandez said her son did suffer brain damage and was hospitalized for three months. She believes officers should have known better.

"It breaks my heart. It really does. He's going through it so bad," she said.