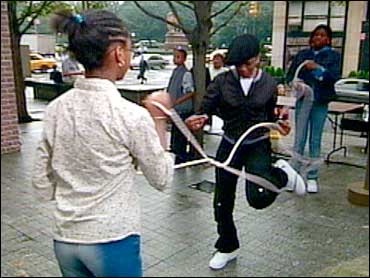 It's a common struggle that's getting harder and harder in our fast-paced society. What's a parent supposed to do after their children beg them to join a soccer team, take piano lessons or any other activity and then they decide they want to quit? It happens all the time. Should you force them to continue, or just let them give up?

"You have to figure out what's behind the so-called quitting," says Robin Goodman, a child psychologist at the NYU Child Study Center. "Often it's because the child it trying to avoid something."

For example, she explains to The Early Show co-anchor Hannah Storm, "Do they want to avoid something outside of them? Like their scheduling overload, their stress, they can't get their homework done. It's really a practical problem. Or let's say you have a lot of peer pressure and there's a kid picking on your child, or you have a coach that's being a little negative, not letting your kid play, or I even hear ballet teachers telling kids they're too fat. Those are concrete real things."

Usually it's something that can be addressed, she notes. Kids may also feel parent pressure about what they think parents want them to do. She explains, "They may not feel good enough, so it's a self-esteem problem. They may think about how an older sibling did it and they'll never win a ribbon. Or let's say it's the uncool thing to do. How do you handle that when you're going to chess or ice-skating and everyone else is doing soccer or pottery?"

Here are ways Goodman says help kids get through that feeling of wanting to quit:

Encourage, don't pressure - Give praise for even the small things, but don't pressure them into being more than they are. Take it slow; they are not going to join the NBA tomorrow. Find ways to encourage what they're already good at.

Problem solve, give options - Give them the chance to participate in the decision to do something. Let them choose what they want to do, empower them.

Make an agreement - Once they've decided on something, you can make an agreement, "OK, I'll buy the equipment for you, but you have to promise to stay in the program for the entire season." If they want to quit, remind them of the agreement.

Test the waters - If they're unsure, see if they can try out one or two lessons or practices, or just observe, that way, you've let them try it out without buying anything, making time commitments, etc.

Discuss with the leaders - If there are any problems, if they come home unhappy all the time, then talk to the coach or instructor. Find out what's going on; get involved. Is there a bully? Is the coach too hard on the kids? Are they over their heads at a certain skill level?

Ultimately, if you've looked at the issues behind them wanting to quit, and you've tried to address them, the child may still want to quit. And in particular, if it's because they're overloaded with activities, it's OK to quit! It's about making choices, and some activities are more fun and challenging than others. Keep exposing them to things and see what they like.