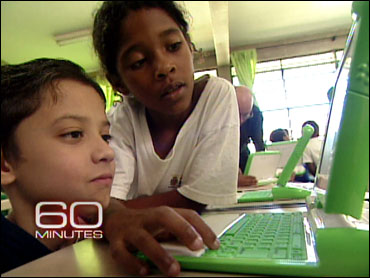 There's a new laptop on the market that's being snapped up by parents looking for a unique holiday gift for their kids. It's only $200, and it isn't like any computer you've ever seen. But there's a catch: in order to buy one for your child, you also have to buy one for a child in a poor country.

And that was the whole point behind these new laptops: to get them to kids in the most impoverished places, so they can become educated and part of the modern world.

As correspondent Lesley Stahl first reported last spring, the laptop, called the XO, was the brainchild of Nicholas Negroponte, a professor at MIT.

Two years ago he founded a non-profit organization called "One Laptop Per Child," through which he recruited a cadre of geeks to design a low-cost computer specifically for poor children.

Negroponte had a dream, a big one: that every child on the planet have a laptop, and along with it, the possibility of a better future.

Negroponte's dream was born in Cambodia.

The idea came to him in a remote village called Reaksmy - a four-hour drive on a dirt road from the nearest town. It's as far from MIT as you can get. They don't even have running water.

Negroponte and his family founded a school here in 1999, putting in a satellite dish and generators. Then they gave the children laptops. Instantly, school became a lot more popular.

Kids who had never seen a computer before were now crossing the digital divide. Negroponte was knocked out.

"The first English word of every child in that village was 'Google'," he says. "The village has no electricity, no telephone, no television. And the children take laptops home that are connected broadband to the Internet."

When they take the laptops home, the kids often teach the whole family how to use it. Negroponte says the families loved the computers because, in a village with no electricity, it was the brightest light source in the house.

"Talk about a metaphor and a reality simultaneously," he says. "It just illuminated that household."

Once the computers were there, school attendance went way up.

Negroponte says that in Cambodia this year 50 percent more children showed up for the first grade because the kids who were in first grade last year told the other kids that "school is pretty cool."

Negroponte wanted this for all children, everywhere, but he realized conventional computers were too expensive. And so his dream of a hundred-dollar laptop was born.

A low-budget computer for children, like a group of second graders in a poor school in Sao Paulo, Brazil. Each child has been given his or her own machine - as part of a test for the Brazilian government to see if they should buy them for all their school children.

"It's very exciting," Negroponte says. "It's very gratifying. It's been two years in the making."

The children seemed to especially like the built-in camera that takes stills and video. It also has Wi-Fi.

Negroponte's idea was that kids don't need teachers to learn the how to use the computer. They can pick it up by experimenting on their own - with help from a friend.

"That is what we are doing… is that that kid is showing this kid - that is key," he says. "They get it instantly. It takes a 10-year-old child about three minutes."

When Stahl asks if he means children who have never used any computer before, Negroponte responds, "Children who've never, in some cases, seen electricity."

"You go into countries where there may not be enough food, where the children may not have good enough education to even teach them to read, why a laptop?" Stahl asks. "It almost sounds like a luxury for these people who need so much more than that."

"Let me take two countries, Pakistan and Nigeria. Fifty per cent of the children in both of those countries are not in school," Negroponte says. "At all. They have no schools, they don't even have trees under which a teacher might stand…"

"You're saying give them a laptop even if they don't go to school?" Stahl asks.

Negroponte took a leave of absence from MIT two years ago, and has done little else but work on this ever since.

He says it's purely humanitarian, and non-profit. With start-up money from Google and other big companies, he assembled a team of engineers and programmers to come up something that would stand up to Third World conditions.

"You can pour water on the keyboard. You can dip into - you know, you can dip the base into a bathtub. You can carry it the rain," he says. "It's more robust than your normal laptop. It doesn't even have holes in the side of it. If you look at it: dirt, sand, I mean, there's no place or it to go into the machine."

Negroponte says it's designed for a child.

It looks like a toy - on purpose. But it's a serious computer with many innovations. For instance, it's the first laptop with a screen you can use outdoors, in full sunlight. Walter Bender, the president of software on the project, says there are loads of new features. You can draw on it, or compose music.

"Right. These ears are the way the laptop communicates with the rest of the world so the laptop listens with these ears," Bender says. "Those are radio antennas, sorta like the…"

"I don't have that on my computer," Stahl remarks.

"No. And one of the reasons why this computer has probably two or three times better Wi-Fi range than your computer is because you don't have that."

"It has two to three times better range?"

"How long does the battery work?"

"By the time we're done with all our tuning, the battery should last 10, 12 hours with heavy use."

If the battery does run out and you live in a thatch hut in the middle of nowhere, you can charge it up with a crank or a salad spinner.

A minute or two of spinning, Bender says, and you get 10 or 20 minutes of reading.

Wayan Vota is director of Geekcorps, a type of Peace Corps that brings technology to developing countries. "The One Laptop Per Child computer is a computing revolution," he says.

He's so fascinated by this computer he has a Web site devoted to it.

"It's an entire change in the way you use computers," Vota says. "It's waterproof… I can't wait to type outside without worrying about dust or heat. So the One Laptop Per Child technology is cutting edge. It's clock-stopping hot."

But he doesn't buy Negroponte's contention that kids can figure it out without a teacher.

"If you hand a child a violin or a piano they can make noise with it, right? But will they be able to make music?" Vota says. "And if you give a child a computer they'll be able to operate the computer but will they really be able to learn without having a teacher, whether it's formal, informal, to help them along that learning path?"

He says there are other problems. For poor countries like Cambodia, there are costs beyond the price of the computer, like satellites to connect to the Internet. And what about theft?

"What says an older kid isn't just going to swipe this thing?" Stahl asks. "It seems like it's inevitable."

"Well we spent a lot of time on security," Negroponte says. "If this is stolen from a child, within 24 hours it stops working. It will not be useable."

But lately One Laptop has had to contend with a new challenge: competition. A lab in Sao Paulo is testing two other laptops the Brazilian government is thinking of buying for school children, including one made in India and Negroponte's biggest competitor: the Classmate by Intel, the giant chip maker.

If Negroponte's program is purely humanitarian and only to benefit children, why would for-profit companies pursue the same goal?

"Because the numbers are so large," Negroponte says. "They look at those numbers and they say, 'if we're not in those, we're toast'."

In Brazil there are 55 million schoolchildren, most of them poor; many live in favelas, or shanty towns. In China there are 200 million children. Worldwide, Nicholas Negroponte says the potential number of kids who could get laptops is over a billion, a fact which has not gone unnoticed by Intel and other hi-tech companies.

Intel gave every student in one class in Mexico a "Classmate" - which Negroponte believes is part of an effort to kill him off.

At a recent lecture at MIT he accused Intel of dumping, of going to the same governments he's trying to sell to and offering the Classmate below cost.

"Intel should be ashamed of itself," Negroponte says. "It's just shameless."

"Negroponte believes that you're trying to drive him out," Stahl told Craig Barrett, Intel's Chairman of the Board.

"We're not trying to drive him out of business. We're trying to bring capability to young people," Barrett responds. "And it's more than just Intel. It's going to take the whole industry to do this."

Barrett flies around the world bringing computers to schools in places like Malinalco, Mexico.

He says that like Negroponte, Intel just wants to help kids get affordable computers. And that they would be willing to reach an accommodation with One Laptop.

"There are lots of opportunities for us to work together," Barrett says. "That's why when you say this is competition, we're tying to drive him out of business: this is crazy."

Not to Negroponte, who says the rivalry goes back to when he first introduced the One Laptop and Barrett dismissed it as "a gadget."

For Nicholas Negroponte it's not just business - it's personal. It's about his dream, his baby.

"Has Intel hurt you and the mission?" Stahl asks.

He thought he'd have millions of orders by now, but countries that had once promised to buy in bulk, haven't. And so, Negroponte spends almost all his time now lobbying government officials to buy the laptops.

He says he travels about 330 days a year.

He says he's confident his mission will succeed, even though he's about to face even more competition as other companies are working on low-cost laptops.

But that will result in more kids getting computers, which is, after all, what Negroponte said he wanted in the first place.

"You know, you call your project One Laptop Per Child. And you mean that every kid in the entire world is going to have a laptop?" Stahl asks.

Asked if that is realistic, Negroponte tells Stahl, "If I was realistic I wouldn't have started this project, okay? … So it's not realistic…but we'll come close."

After 60 Minutes first broadcast this story, Negroponte and Intel decided to get together, sort of. Negroponte invited an Intel representative to sit on his board, but Intel is still selling the competing Classmate computer.

If you're wondering how to get Negroponte's laptop for your family, it's only for sale to Americans on the Internet, and only until the end of this month.