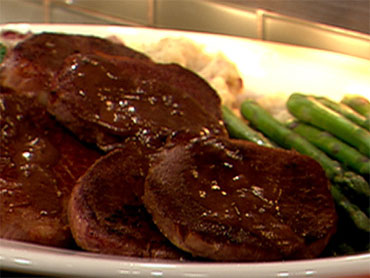 Even though she's a 44-year-old mother of two, Madonna is still pushing the envelope.

A music video for her new album, "American Life" included controversial images of war that she later pulled.

Madonna, who also sat down for an interview with MTV News Correspondent John Norris after her MTV concert in New York, told Norris she made the video before the war and had second thoughts after the war with Iraq started.

In the original video, Madonna plays with images of war including a satirical army-style fashion show and ends up throwing George Bush a grenade, which turns out to be simply a lighter. The new version has
Madonna singing against a backdrop of different national flags.

"She said that times changed," Norris told The Early Show co-anchor Rene Syler. "As war became a reality, she had second thoughts about it, and a lot of people have applauded her decision to go ahead and pull it. And do this much tamer version."

Was it patriotism or simply good marketing?

"I don't know about patriotism," Norris said. "But I am pretty convinced that it was second thoughts. I was out in L.A. a month ago and they were excited to show me the completed version of the video, the one that eventually was pulled. And it was definitely intense." Norris said it was a video that deserved to be seen.

Madonna had said the original video was her last-ditch effort to throw out images of the horror of war and reality, to galvanize people to protest. Then the war started, and by the time the video was finished, it was too late.

Norris said the the original video was inspired by Michael Moore's speech at the Oscars this year and a number of other things. "She saw him in London last year and she was inspired to make her own statement, in a way," Norris said. "She certainly believes in peace. But as she said to me in L.A., she realizes there are times when action has to be taken as well. She certainly supports the troops."

Family and religion are playing a more prevalent role in her life now. "She's a mom now," Norris said. "She's a wife. And she has become a real serious student of Kabbalah, the study of Jewish mysticism, and it's really had a profound effect on her outlook on life. And this album very much deals with her reassessment about what is important.

"She's the woman who will probably never live down the name material girl. But she really, a lot of this album addresses the fact that those things that she once thought were all so important - fame, stardom, controversy, if you will - at the end of the day don't matter nearly as much as those more lasting things, like family and relationships," he said.

The anticipated tenth studio album entitled "American Life" is her first collection of new material since the critical and commercial success of "Music" in 2000.

Recorded over a full year in London and Los Angeles, the new album features 11 new tracks. A deeply personal work, it was written and produced alongside Mirwais Ahmadzai, with whom Madonna also collaborated on "Music".

If you missed "Madonna On Stage And On The Record" the first time, visit MTV.com for a rerun schedule.