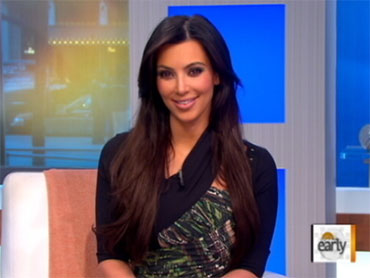 It seems like keeping up with Kim Kardashian, star of "Keeping Up with the Kardashians," has become a national obsession. She is one of the most searched celebrities on the web and just this week Kardashian was announced as the top-earning reality star of the year.

She seems to never slow down. But she did find a few moments to stop by "The Early Show" Thursday to talk about her most recent accomplishments, including her new book, "Kardashian Konfidential," and a new laser hair removal system endorsement.

But what gets under Kardashian's skin?

"Early Show" co-anchor Erica Hill asked Kardashian, "So much focus on you. We see you all over the place as we mentioned, which has to be tough. When did you realize you couldn't just go out of the house to do something or run an errand?"

Kardashian answered, "Well, I think that like being in New York, I was twittering, saying, 'Oh, my God I can't stop eating like this,' the hot dogs and nuts and everything on the street corners and I gained 10 pounds. Then all of a sudden you see pictures of me in baggy clothes and I'm pregnant. Stuff like that gets to you, but it comes along with the territory. But it's tricky, you know, because you always feel you have to look a certain way or be a certain way, so I've just kind of given up a little bit, you know, on caring."

Hill responded, "Which is good. You are so confident which is a great message to send."

"Especially to young women," Hill said. "A lot of crazy things written about you, like you were actually pregnant with Kanye's baby at one point. What's the craziest thing you have read about yourself?"

"That was crazy," Kardashian said. "It is funny when I'm linked to people I've never even met before. I don't know, I think being single right now and for the first time, like Kim's going boy crazy because I'm seen out with a few different people, but yet I've been like married and in years-long relationships. People take stories and twist them. I mean, I've heard every plastic surgery rumor you could imagine, I've heard every dating rumor you could imagine. So, you just literally, like, thank God I have my sisters because we can laugh at it together and none of it really matters."

"Great to have them," Hill said. "You clearly have a tight, supportive family."

"I think I couldn't do it without them," Kardashian said. "I think it is really important."

Click on the video below for her full "Early Show" interview: