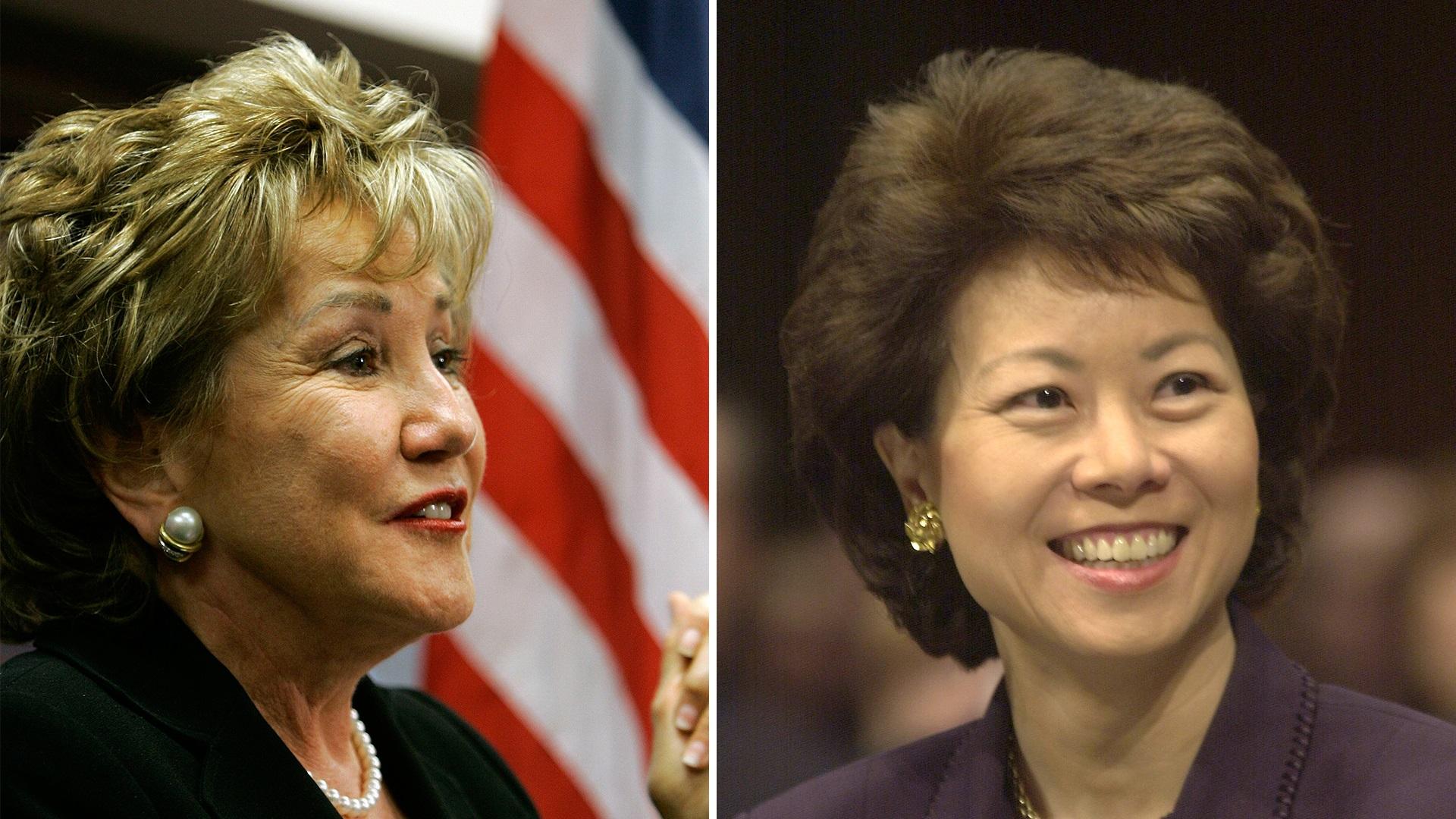 Dole and Chao share a few striking similarities in their personal and professional lives. Both women served as secretary of Labor and now Chao has been nominated for secretary of Transportation, the role Dole had in the Reagan administration.

Max Stier, the CEO of Partnership for Public Public Service, a D.C.-based nonprofit that works to make federal agencies more efficient and effective, agreed the women share an “unusual” amount of similarities. But he added that, when looked at individually, Dole and Chao represent “highly unusual” government officials.

“Male or female, you don’t have that many people with that breadth of experience as a public servant in the federal government,” he told CBS News.

Specifically, Steir pointed to Chao’s past experiences with running federal agencies. She served as secretary of labor under President George W. Bush, becoming the longest labor secretary since World War II, and the first Asian-American female to serve in a president’s Cabinet. Before that, she served as deputy secretary of transportation under President George H.W. Bush, led the Peace Corps, and chaired the Federal Maritime Commission.

Those senior leadership roles gave her “huge leg up,” according to Stier, in being selected as the next transportation secretary, because she was already familiar with navigating the complexities of the White House, Congress, and other large government entities.

Similarly to Chao, Dole worked in the White House under the Johnson administration, served as Secretary of Transportation in the 1980s, and led the Labor Department under Bush’s administration. The roles she undertook, however, weren’t always political. Dole chaired the American Red Cross for eight years, revamping the blood-donation program, including its processing and distribution.

From first glance, it may seem striking that Dole and Chao share so much in common, especially their overlapping roles in the presidential cabinet. But Julian Zelizer, a professor of history and public affairs at Princeton University, said that both secretary positions deal with similar fundamental issues, such as the rights and benefits of federal workers.

Stier, however, said it’s less about the candidate’s expertise in a particular subject matter--like labor or transportation--than it is about touting a lengthy track record in senior level management and having “real insight into the institution of Congress.”

“There may be some set of issues that cross over, but the reality is that more important will be the understanding of the system and the ability to work with those critical stakeholders,” Stier said.

They added a “certain amount of perceived legitimacy” in the administrations where they worked, the Princeton professor added. For Chao, that was reworking the rules governing overtime as the head of the Labor Department, increasing the salary threshold for overtime pay from $13,000 to $23,660 for white-collar workers.

As secretary of Labor under President Bush, Dole launched the “Glass Ceiling Study” to identify the gender barriers preventing women and minorities from holding senior management positions. Dole herself has also held elected office. Like her husband, Dole has been a senator, in her case from her native North Carolina.

As secretary of Transportation she spearheaded the campaign to increase the drinking age to 21 and advanced auto safety requirements, according to the National Women’s Hall of Fame, of which Dole is a initiated member.

On a more personal level, Zelizer also sees the women’s shared background, particularly their marriages to prominent Republican men, as more than a mere coincidence. Rather, it’s the culmination of a post-1960s trend in which the one-wage male breadwinner family model was challenged.

“[Their] marriages to the Senate signal just how entrenched Republicans have become over the decades as more families have multiple senior party brokers in the home,” he told CBS News. The “coming of age” narrative, he added, contributed to the rise of women holding powerful and influential positions.

“They both were very supportive to their husband’s campaigns, each being seen as a huge statement within a Republican Party that suffered from a gender gap,” he said. “More important they offered important strategic assistance to them.”

A Washington Post article from 1996--the year Bob Dole ran for president against Bill Clinton-- wrote, “No other presidential challenger’s wife has ever addressed a national political convention. No other wife of a challenger or sitting president has so overtly taken on her husband’s foe. And no other wife has drawn so much speculation about her own political plans in the closing days of a campaign.”

Mrs. Dole did launch a brief presidential campaign in 2000, but withdrew her name before any of the primaries began.

As for Chao, Time Magazine profiled her as her husband’s “Secret Weapon” on the campaign trail, which Sen. Mitch McConnell reiterated publicly at a GOP political picnic.

“The biggest asset I have by far is the only Kentucky woman who served in a president’s cabinet, my wife, Elaine Chao,” he said.