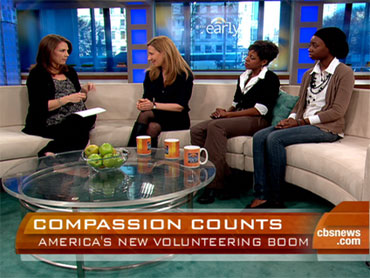 According to a new poll conducted by Parade Magazine, our nation is in the midst of a volunteering boom at home and abroad.

According to Listfield, public service has become more than a phrase or a school requirement.

"Basically we see public service not just as a phrase or a way of life these days," she said. "I think once people get in the habit of it they continue. Especially once they see how it affects other people and how it affects them."

The Parade poll showed that 91 percent of Americans have been engaged in community in the last 18 months.

"What we have found is a combination of things. During hard times people reach out to their neighbors. We are seeing more women volunteering and we're calling it the Obama effect," Listfield explained. "Unanimously they believe it's personally important to support a cause that's important to them. It's simply altruism. Seventy-eight percent believe they're more involved than their parents, many of them are getting their children involved."

The poll breaks down volunteers into three types: Yeppies, rapid responders and the mission-minded.

According to Listfield, yeppies are young engaged problem solvers. They tend to be young. They have a strong belief individuals can change the world and they seek out ways to contribute and make a difference.

Listfield pointed out there's a new dynamic to this group because volunteering is very much a social act for them. Much of it takes place online, on Facebook and Twitter as a way to reach other people that feel like they do.

Response is a key word; volunteers act in response to a certain event, Listfield pointed out.

"The catalyst tends to be very personal, for example if they have a loved one who has cancer; they get involved because of that. They react to things that touch them personally," she said.

"The last is mission-minded and they tend to be older and they're motivated by their religious beliefs. They see it as a moral imperative. They tend to support basic human needs such as food, shelter, etc. Some examples are Habitat for Humanity or your church or synagogue's local food bank," she explained.

Parade's poll also asked Americans what they would do if they had to give $100,000 to charity and the results showed:

For Listfield, animal welfare was surprising.

"Animal welfare came out above education, religious donations, the environment and human rights," she said. "Americans love their pets. Food and shelter is a very basic human need and people react to that. And many people know someone who has been affected, say from cancer. For disaster relief we see the images on television and we respond."

The Parade poll also shows that community counts - with 94 percent who believe that it's important to be involved in a community cause.

Volunteers Laura Tucker and Tonya Ingram, who met through volunteering at the Fordham-Bedford Children's group, sat down with Listfield and Hill to share how their experiences have improved their lives.

Listen to their inspiring stories: