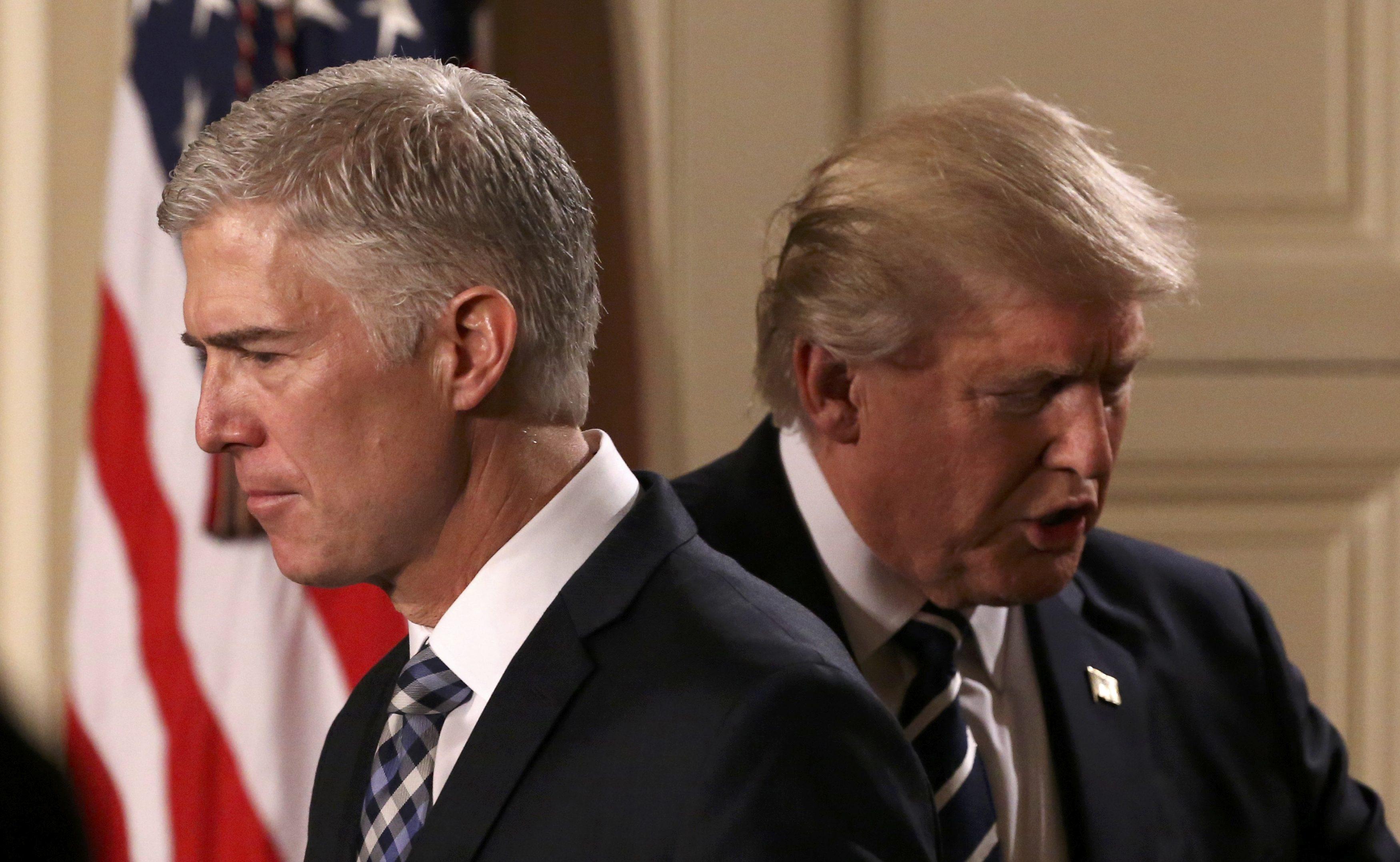 Senate Minority Leader Chuck Schumer immediately fired off a statement that Gorsuch, a consevative Denver-based judge who currently sits on the 10th U.S. Circuit Court of Appeals, would face an “exhaustive, robust, and comprehensive debate” on his fitness to be a Supreme Court justice.

Others, like Oregon’s Jeff Merkley, charged that the seat on the Supreme Court bench was “stolen” from former President Obama after Republicans refused to confirm Judge Merrick Garland. Merkley vowed to do everything in his power to “stand up against this assault on the court,” seeming to threaten a filibuster of Mr. Trump’s nominee.

And still more Democrats in the upper chamber said that despite their concerns about Gorsuch, the potential justice deserved a fair hearing and to be put before a Senate vote.

If Democrats decide to filibuster Gorsuch, 60 votes would be needed to confirm him -- unless Senate Republicans choose to deploy the “nuclear” option to overcome a filibuster with a simple majority. The GOP holds 52 seats in the upper chamber and would need at least eight Democrats to push Gorsuch through in this scenario.

As the showdown over the empty Supreme Court bench continues, CBS News is keeping a running list of whether senators have come out against Gorsuch, whether they favor giving him a hearing, or whether they would support a possible filibuster of the nominee rather than allowing a straight up-or-down vote. Take a look below:

Here’s a sampling of how all the Senate Democrats that have reacted to the Gorsuch nomination so far:

Senate Minority Leader Chuck Schumer, D-New York, said in a statement that the Senate “must insist upon 60 votes for any Supreme Court nominee, a bar that was met by each of President Obama’s nominees.”

“The burden is on Judge Neil Gorsuch to prove himself to be within the legal mainstream and, in this new era, willing to vigorously defend the Constitution from abuses of the Executive branch and protect the constitutionally enshrined rights of all Americans,” Schumer said. “Given his record, I have very serious doubts about Judge Gorsuch’s ability to meet this standard”

“If all we do is continue to extract a pound of flesh from each other we will eventually strip our republic bare to the bone,” Coons, a member of the Senate Judiciary Committee, told reporters Wednesday. “It is of course only human to want some revenge from this unprecedented theft of a vacant Senate seat. Our challenge is to not act in a petty way but to try to act in a balanced and productive way because this institution [the Senate] is so important that further deconstructing it puts all of us at risk.”

“The most fundamental thing that must be understood about tonight’s announcement is that this is a stolen seat. This is the first time in American history that one party has blockaded a nominee for almost a year in order to deliver a seat to a President of their own party,” he said in a statement. “This is a stolen seat being filled by an illegitimate and extreme nominee, and I will do everything in my power to stand up against this assault on the Court.”

Sen. Joe Manchin, D-West Virginia, said the Democratic party should go through the confirmation process with Gorsuch, despite what Republicans did with Obama nominee Merrick Garland.

“What the Republicans did with Merrick Garland was absolutely unbelievable to me. It was a disaster. I was embarrassed by how Mitch McConnell led the Republicans not to even be decent and considerate enough to even talk to the gentleman, let alone vote for him,” Manchin, who represents a state that voted for Mr. Trump in the 2016 election, told MSNBC. “If this is the right person or not, I don’t know but we should go through the process. I’m anxious to sit and talk to him.”

“I understand he has impeccable, basically, credentials and well thought of in a class, basically, with Barack Obama at Harvard and he got overwhelmingly unanimous consent when he came through this process before,” Manchin said. “So let’s find out. I don’t know until I talk to him. I’m anxious to do that.”

Sen. Sherrod Brown, D-Ohio, said in a statement on Twitter that he would oppose Gorsuch over his stance of Wall Street and corporate interests:

Sen. Heidi Heitkamp, D-North Dakota, told Politico that Trump’s pick “should get a full hearing.” Asked if Gorsuch should be up for a straight vote rather than getting subject to a filibuster, Heikamp said: “Absolutely.”