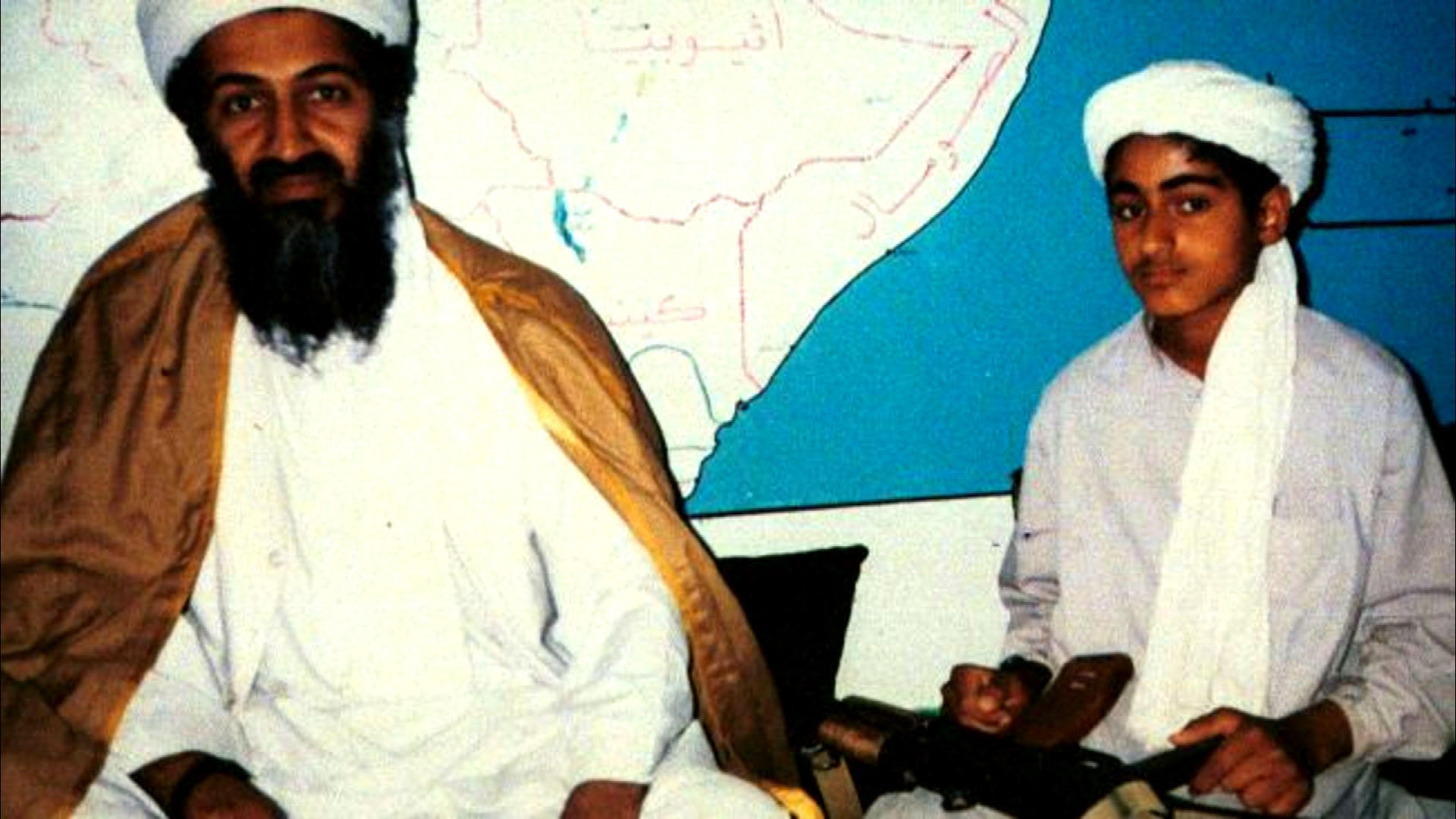 Editor's Note: On July 31, 2019, an American official told CBS News that Osama bin Laden's son, Hamza bin Laden, believed to be in line to take over al Qaeda, was killed in a military operation. The U.S. government played a role in the strike that killed him, but it is not clear how or when he died. In the 2017 report below, the FBI's lead investigator of al Qaeda after the 9/11 attacks told "60 Minutes" that Hamza had become a menacing new figure in al Qaeda and was possibly poised to become its leader.

Six years ago when Navy SEALs hunted down and killed Osama bin Laden, it seemed as if the United States had the upper hand in the fight against al Qaeda. But while the U.S. has decimated its leadership with targeted strikes, there are new concerns that al Qaeda has continued to grow and get stronger. Ali Soufan, who was the FBI's lead investigator of al Qaeda after the 9/11 attacks, has spent the last two years analyzing an unprecedented cache of documents seized in bin Laden's compound -- a treasure trove, in the words of the U.S. government, including the personal correspondence of Osama bin Laden, al Qaeda's dangerous new strategy, and the story of a new bin Laden waiting in the wings.

Ali Soufan: Osama bin Laden was not just, you know, sitting in his house trying to avoid being captured or killed. He was, in some instance, micromanaging al Qaeda and its affiliates.

Ali Soufan: Yeah. Micromanaging. You know, you can plant this crops and this crops. It's very good. Oh and by the way, you know, stop beheading people and cutting heads. That makes me look bad. You know I have a brand to protect.

That's Ali Soufan's interpretation of some of the documents seized from bin Laden's hideout in Pakistan -- showing him running al Qaeda like a corporate CEO, worried about the reputation of his brand. Deciphering the inner workings of al Qaeda has been a life's work for Soufan. A Muslim American who was born in Lebanon, he was the only Arabic-speaking FBI agent based in New York on 9/11. He now advises the United States government on national security issues and has written a new book, "Anatomy of Terror."

Holly Williams: I mean, how useful are they? Do they tell you where al Qaeda's next attack is going to be?

Ali Soufan: They won't tell you where al Qaeda's next attack is going to be. But it gives you a kind of window of the internal dynamics of the organization.

The declassified documents include Osama bin Laden's handwritten will, with instructions that holdings of "about 29 million dollars," should be spent on "fighting in the cause of Allah," orders to militants to travel on cloudy days to avoid drone strikes, and al Qaeda directives that future attacks should not be wasted on the British, but instead "concentrate on America" -- and "not be limited to blowing up airplanes."

Ali Soufan says some of the most significant documents shed light on a mysterious and menacing new figure in al Qaeda who may be poised to become leader. He's youthful, angry and named bin Laden, Hamza bin Laden, the son of Osama. Seen here as a young boy, he was separated from his father when he went into hiding not long after 9/11.

Ali Soufan: This is a letter from Hamza bin Laden to his father.

Holly Williams: And he hasn't seen his father for several years.

Ali Soufan: Eight years and he didn't see his dad. And he's basically just telling him, you know, how much he misses him. He tells him that, you know, I remember every, every look you looked at me, every smile you gave me, every word you told me.

The letter, written when Hamza was around 22 years old, also reveals a son eager to follow in his father's footsteps. "I consider myself to be forged in steel," he writes, "the path of jihad for the sake of God is what we live."

Before these documents were obtained, almost nothing was known about Hamza bin Laden. The few photographs and videos that do exist show him as a child, mostly featured in al Qaeda propaganda.

Ali Soufan: He was that kid exhibited leadership skills early on.

Holly Williams: So he was a kind of al Qaeda child star, is that right?

Ali Soufan: Yeah. In a way, he was a poster kid for al Qaeda. They featured him in so many of their propaganda. And for members of al Qaeda who were indoctrinated with these propaganda videos he means a lot to them.

Now believed to be about 28 years old, in January he was classified by the U.S. as a "specially designated global terrorist" -- the same label once given to his father.

Since there are no known photos of Jamza as an adult we asked a forensic artist to create this age progression illustration to give us an idea of what Hamza bin Laden might look like today.

Ali Soufan: We believe so.

Ali Soufan: Well, interestingly enough his recent message that came out he delivered the speech as if it's his father delivering the speech, using sentences, terminology that was used by Osama bin Laden.

Hamza bin Laden has recorded four audio messages -- all in the last two years. Ali Soufan believes the similarities with his famously charismatic father could help Hamza unite and inspire the jihadi movement.

Ali Soufan: Oh, absolutely. The whole thing was about vengeance. He wants to avenge his dad.

After 9/11, to avoid being captured or killed, Hamza fled to Iran with his mother and three of bin Laden's top lieutenants. Ali Soufan believes these men were responsible for educating Hamza in extremist Islam and military tactics.

Holly Williams: You think they were consciously grooming him to be a future leader of al Qaeda?

Ali Soufan: I believe so. And also Hamza himself, basically, told his father, I am ready. I am forged of steel now. I'm ready to go.

Osama bin Laden was killed before he could be reunited with his son, who Ali Soufan believes is now hiding somewhere in Pakistan.

Unraveling the secret world of the bin Ladens, Soufan says, is crucial to stopping another attack like 9/11.

Holly Williams: Someone who knows you told me that you actually feel a sense of responsibility for what happened.

Holly Williams: But no one in their right mind would hold you responsible for that.

Ali Soufan: That's true, but you know what? We were involved in an investigation. We had all the information at our fingertips.

Holly Williams: You were so close?

Ali Soufan: It does not matter how close we were. It happened. We failed. Three thousand people died. The world is very different today because of our failure.

Holly Williams: You've said that you felt a kind of dread before 9/11.

Holly Williams: Do you feel that same kind of dread today about the threat from al Qaeda?

Al Qaeda now has footholds in around a dozen countries throughout the Middle East, Africa and into South Asia.

In Syria alone it's estimated to have up to 20,000 followers. Al Qaeda in the Islamic Maghreb operates across the Sahara Desert, taking foreigners hostage and attacking hotels used by Westerners. These regional groups are known as affiliates, with local leaders who have publicly sworn allegiance to al Qaeda's central command.

Ali Soufan: Al Qaeda is stronger than ever. I don't believe even bin Laden in his wildest dreams thought that he will have followers who command armies, troops, control lands, are extremely powerful geopolitical players as al Qaeda today.

Al Qaeda owes much of its growth to the Arab Spring -- a series of uprisings starting in 2010 that toppled dictators and sparked civil wars. From his hideout in Pakistan, Osama bin Laden anticipated the power vacuum that would result, and the opportunity to expand al Qaeda's reach. This order to his commanders tells them to "support the people and encourage their rebellion." The strategy has paid off in the chaos of Syria's civil war, where al Qaeda's affiliate has seized control of entire towns and villages -- though it now calls itself Hay'at Tahrir al-Sham.

Holly Williams: Osama bin Laden from his hideout was telling all of these local affiliates, don't call yourselves al Qaeda.

Holly Williams: Why not?

Ali Soufan: Because he believed that the moment that they say the name al Qaeda, the United States, the West the local regimes will use it against them, and people won't listen to the message. They just listen to the fact that they are al Qaeda. So each one of the affiliates we start seeing calling themselves a totally different name, that al Qaeda is not even part of the sentence.

Holly Williams: So they were rebranding themselves?

Al Qaeda is a strategic and innovative enemy -- the most dangerous kind, according to John Miller - head of counterterrorism and intelligence for the New York City Police Department. He and Ali Soufan have known each other for 15 years...Miller says Soufan helps him get inside the mind of al Qaeda.

Holly Williams: Are we safer now than we were at the time of 9/11, do you think?

John Miller: Yes, exponentially so, because we have improved intelligence and improved collection. But remember, as we grow and we learn, the adversary grows and learns, too.

John Miller is also a former journalist and CBS News correspondent….one of the few Westerners to have interviewed Osama bin Laden.

John Miller: The mistake that we risk making is to look back on 9/11 as a singular event and say, "Well, al Qaeda was a one-attack wonder. And since then they've been falling apart." Al Qaeda has sustained itself in the shadows. And while other groups are getting more attention, they're getting bigger. And they're patient.

Holly Williams: What is the fear when it comes to Hamza? Is it that he helps recruit and radicalize young men?

John Miller: The base fear is A) that as he does more recordings and more messages that he gets better at it and B) that he is, he is targeting a younger audience.  And if you have a young figure with bin Laden as that brand name who becomes an effective communicator, that's a bad thing.

Ali Soufan: Yeah. I think we're not done with the bin Ladens yet.

Searching for the next deadly virus, before it ignites another pandemic

The secret U.S. unit that helped the Allies beat Hitler
Thanks for reading CBS NEWS.
Create your free account or log in
for more features.
View CBS News In
CBS News App Open
Chrome Safari Continue
Be the first to know
Get browser notifications for breaking news, live events, and exclusive reporting.