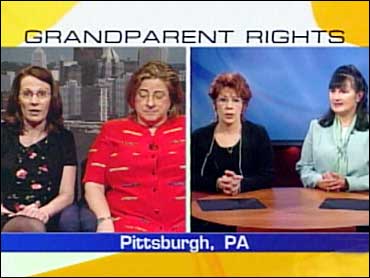 Bonnie Miller, who lost her husband Jeff last year, wants to start a new life with her new fiancé, but Rose and Ronald Miller, Jeff's parents, want her - and their grandfchild - to stay nearby.

The 32-year-old widow said she never intended to prevent her in-laws from seeing their grandson. But a year after her husband died of leukemia, it was time for her to start fresh.

She told The Early Show co-anchor Harry Smith she met her fiancé in August while chatting on the Internet. She never thought this was going to be an issue.

But a judge's temporary order on April 29, says she can't move more than 25 miles from the home she's already sold, at least until a June 4 hearing.

Talking about her in-laws, she said, "I think that he (her fiance) is part of the problem for them. He is a wonderful man. They state that they don't know him. That nobody knows him. I know him. He is wonderful to my son. My son has much love for this man. Everybody that has met my fiancé absolutely adores him."

The judge also gave the grandparents more time with their grandson than they previously had.

The paternal grandmother, Rose Miller, said to Smith that, though her daughter-in-law has a right to start a new life, her grandson Kevin has a life, too. "We're his only blood relatives, and I think that he has the right to grow up knowing us and knowing that we all love him," Rose Miller said.

After she and her husband were unable to get in touch with their grandson for a period of three weeks, she said, they filed a custody suit.

Noting the conversation had started to sound like something between Dr. Phil and Judge Judy, Smith asked the grandparents' attorney Carol Hanna why she believes the grandparents could make Bonnie Miller and her son stay in Pittsburgh.

"Pennsylvania law permits grandchildren to remain in contact with their grandparents. Pennsylvania recognizes that even though parents may be starting a new life, that doesn't mean that the children have to lose their history and divorce their past," Hanna explained.

"Section 5311 of the Pennsylvania statutes gives grandparents the right to seek partial custody. What they're trying to do is, we believe, impermissibly and unconstitutionally expand that right to prohibit relocation. If you look at the United States Supreme Court Law it says parents have a primary and basic right to the care, custody and control of a child. It's just an expansion way beyond what the legislators intended. There's no case law that supports what they're trying to do, Ferri said.

June is 4 is the hearing.