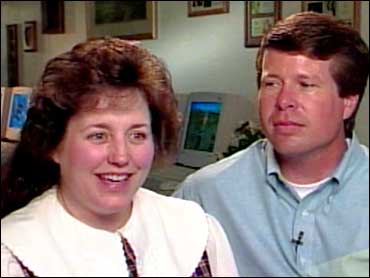 Mother's Day is just around the corner, and many families will be planning something special for that date.

The Early Show correspondent Melinda Murphy talked with one mother who's going to be quite busy on the day that celebrates mothers.

Michelle Duggar just won the "Young Mother of the Year Award" in Arkansas, which is sponsored by American Mothers Incorporated.

Duggar is like any mom -- multiplied several times over.

Michelle Duggar, 37, and her husband, former state Rep. Jim Bob Duggar, have 14 kids. All of their names start with the letter "J," and number 15 is due this month.

"I'm either expecting or nursing," Michelle Duggar says with a laugh. "We actually didn't set out to have a large number of children. I don't think that was our intention when we were first married. But I think we realized children are a gift."

The Duggars are a very religious, Southern Baptist family.

"I just kind of got used to it as they came," says Joshua, the oldest child.

Added together, Duggar has spent almost a whole decade pregnant -- and she's only 37.

She admits to having morning sickness, but mornings at the Duggar house would make anybody go bananas.

From dawn to dusk, each tiny tot has an older buddy who helps them with just about everything

The little ones have their responsibilities, too. Joseph fetches the laundry. Then, Jill and Joy-Anna take their turn washing clothes the girls have made themselves.

Josiah takes out the trash, while his brother, John, trains the dog, Jasmine.

The Duggars call the chores "jurisdictions," and, they say, it keeps them disciplined. There's an almighty checklist.

"We give them a little reward per check … about 3 cents a check," says Jim Bob.

But the Duggars check more than just chores. Michelle Duggar homeschools all 14 children. Sometimes, they study as a group or on their own. They use workbooks, computers and each other to study.

Michelle Duggar notes, "The older child gets to become a teacher. And it seems like you learn so much more when you're the teacher than when you're just the student."

From math to music, the Duggar kids don't miss a beat.

"We heard a long time ago that it if you play a violin, it helps you work on the left side of the brain," explains Michelle. "Sometimes, there are eight lessons going on at the same time. And you just kind of have to block it out."

That may be hard to do in the modest house of only 2,400 square feet.

There's almost always a line at one of the two bathrooms, but soon that will change.

Dad and the two oldest boys are building a 7,000-square-foot house. The Duggar dream house will have bathrooms galore, a commercial kitchen and one heck of a laundry room.

How do they afford it? Jim Bob Duggar made some smart investments, and they're pretty frugal. The Duggars shop in bulk, basketfuls at a time.

When they do splurge, they go in style -- the family bus. But the bus has a couple of extra seats.

Jim Bob Duggar says he has something very special planned for Mother's Day. Michelle says if that means he's cooking, she'll have quite a mess to clean up when he's done.

Monks Are These Dogs' Best Friends