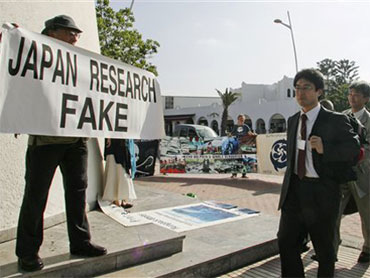 The International Whaling Commission began its most important meeting in decades debating whether to scrap an ineffective 25-year ban on commercial hunting and instead allow for limited whaling under a more enforceable regime.

Though environmental groups say the 1986 moratorium has been one of the most successful animal conservation measures in history, it has failed to prevent Japan, Norway and Iceland from killing hundreds of whales each year in defiance of the commission.

A proposal before the 88-member commission would allow the three countries limited whaling in exchange for removing their rogue status and imposing a 10-year period of international monitoring.

The proposal's author, IWC Chairman Cristian Maquieira, has said it would save about 5,000 whales over 10 years, though he was not attending this week's meeting due to illness.

Allowing for limited hunting might also reduce the harassment by conservationists trying to disrupt whale hunts - sometimes leading to violent clashes at sea.

Within minutes of opening the annual conference, the commission's deputy chairman, Anthony Liverpool, adjourned the open sessions for two days to give pro- and anti-whaling countries a chance to discuss whether a compromise was possible. The suspension of the normal agenda was unprecedented in recent decades, and reflected the contentiousness of the proposal to lift the ban. The meeting ends Friday.

Environmentalists attending as observers denounced the move to hold closed-door negotiations. Calling it "fundamentally unacceptible," Wendy Elliott of WWF International said all the preparations for the meeting were held in secret, and "now is the moment to open up a transparant and honest discussion."

Many commission members oppose sanctioning any whale hunting at all. Others might agree to a deal that imposed tough conditions to protect the most endangered species and that demanded Japan halt its forays into the Antarctic Whaling Sanctuary, where some 80 percent of the oceans' whales go to feed.

"We want two things: we want to save more whales, and we want a whaling commission that functions well," Dutch delegate Marianne Wuite said.

The future of the 65-year-old commission has been undermined by its inability to stop Japan, Norway and Iceland from hunting whales.

In 1994 it declared the Antarctic off-limits, but Japan objected to the sanctuary, and the commission has no mechanism to ensure compliance or enforce its rules.

Making matters more complicated, the commission's original 1946 rules allow for member countries to claim exemptions to commission decisions. Japan conducts its hunting under a clause allowing the killing of whales for scientific research, although nearly all the meat goes to the commercial market.

The proposal would do away with exemptions and require whaling countries to agree to abide by the rules. They would outfit their whaling ships with satellite monitors, letting international observers track their movements and activities. If a country hunts more than its quota, that quota would be lowered in subsequent years.

Currently, more than 1,000 whales are killed each year, with nearly 2,000 killed in the peak year of 2006, the Pew Environmental Group said.

"Japan is the key," said Susan Lieberman, director of Pew's whale conservation program. "The question is whether Japan is going to compromise or not."

She said Japan might be coaxed to stop whaling in the southern sanctuary - an expensive and highly subsidized industry - if it won international recognition of its right to hunt whales off its coast.

"If this were purely economic, they wouldn't be whaling in the Antarctic," she said.

The United States has said it favors a deal, but says the proposed quotas are too high. The European Union says it wants to maintain the moratorium, but it also has indicated it would look at a deal that calls for a phasing out of hunting over several years.