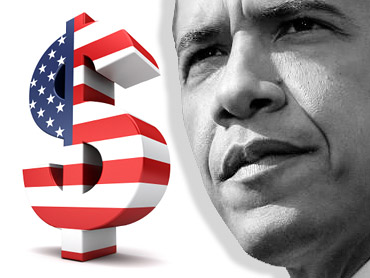 Both the White House Office of Management and Budget and the nonpartisan Congressional Budget Office predicted the budget deficit this year would swell to nearly $1.6 trillion, a record, and far above the then-record 2008 budget deficit of $455 billion.

But while figures released by the White House foresee a cumulative $9 trillion deficit from 2010-2019, $2 trillion more than the administration estimated in May, congressional budget analysts put the 10-year figure at a lower $7.14 trillion.

One reason for the difference: The CBO projection is based on an assumption that all the tax cuts put into place in the administration of former President George W. Bush will expire on schedule by 2011 as dictated by current law. President Barack Obama's budget baseline, however, hews to his proposal to keep the tax cuts in place for families earning less than $250,000 a year.

Beyond the 10-year forecast, the nation will face further challenges posed by rising health care costs and the aging of the population, the CBO said. "The budget remains on an unsustainable path" over the long-term and will require some combination of lower spending and higher tax revenues, it said.

"This recession was simply worse than the information that we and other forecasters had back in last fall and early this winter," said Obama economic adviser Christina Romer.

She predicted unemployment could reach 10 percent this year and begin a slow decline next year. Still, she said, the average unemployment will be 9.3 in 2009 and 9.8 percent in 2010. The CBO had similar figures.

Both see the national debt - the accumulation of annual budget deficits - as nearly doubling over the next day. The total national debt, made up of amounts the government owes to the public, including foreign governments, as well as money it has borrowed from itself, stood Tuesday at a staggering $11.7 trillion.

Obama himself may have drowned out the rising deficit news with the announcement Tuesday that he intends to nominate Ben Bernanke to a second term as chairman of the Federal Reserve. The Bernanke news, and a report that consumers are regaining some confidence, may have neutralized any disturbance in the financial markets caused by the high deficit projections. Stocks were up in late morning trading.

The deeper red ink and the gloomy unemployment forecast present Obama with an enormous challenge. The new numbers come as he prods Congress to enact a major overhaul of the health care system - one that could cost $1 trillion or more over 10 years. Obama has said he doesn't want the measure to add to the deficit, but lawmakers have been unable to agree on revenues that cover the cost.

What's more, the high unemployment could last well into the congressional election campaign next year, turning the contests into a referendum on Obama's economic policies.

"The alarm bells on our nation's fiscal condition have now become a siren," Senate Minority Leader Mitch McConnell, R-Ky., said. "If anyone had any doubts that this burden on future generations is unsustainable, they're gone - spending, borrowing and debt are out of control."

Both Romer and budget director Peter Orszag said this year's contraction would have been far worse without money from the $787 billion economic stimulus package that Obama pushed through Congress as one of his first major acts as president.

which spends most of its money in fiscal year 2010 - will grow by tens of billions of dollars above the original $787 billion.

For now, while the country tries to come out of a recession, neither spending cuts nor broad tax increases would be prudent deficit-fighting measures. But Obama is likely to face those choices once the economy shows signs of a steady recovery, and it could test his vow to only raise taxes on the wealthy.

Still, 10-year budget projections can be "wildly inaccurate," said Stan Collender, a partner at Qorvis Communications and a former congressional budget official. Collender notes that there will be five congressional elections over the next 10 years and any number of foreign and domestic challenges that will make actual deficit figures very different from the estimates.

The Obama administration did tout one number in its budget review: The 2009 deficit is now expected to be $1.58 trillion, $263 billion less than projected by the White House in May. That's largely because the White House removed a $250 billion item that it had inserted as a "place holder" in case banks needed another bailout.