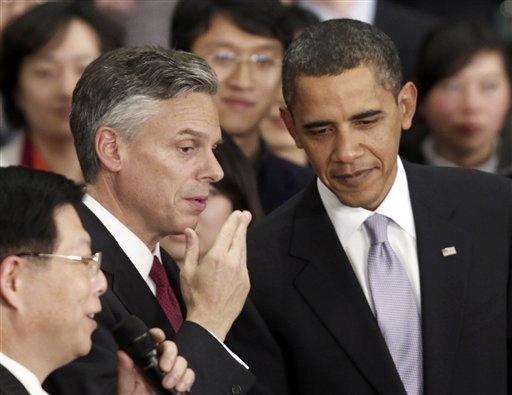 WASHINGTON (AP) - U.S. ambassador to China Jon Huntsman, a Republican with potential presidential ambitions, submitted a letter of resignation to the White House on Monday announcing he intends to leave the post April 30, a senior administration official said.

Huntsman, a former governor of Utah, was appointed ambassador by President Barack Obama in 2009. Huntsman's plans have generated considerable attention in political circles because his foreign policy experience could stand out in a crowded GOP field.

Earlier Monday, White House spokesman Robert Gibbs said Huntsman had informed officials of his desire to end his diplomatic assignment. But Gibbs said the White House had no indications that Huntsman would seek to run against the president.

Huntsman, 50, surprised many Republican strategists when he accepted the post in China, considered one of the United States' key diplomatic assignments. A fluent Mandarin speaker from his time as a Mormon missionary, he earned high marks from the Democratic administration but perhaps damaged his own political standing should he seek the GOP nomination in 2012 or 2016.

The early primaries will have a strong role for conservatives and tea party-style activists, and Huntsman could be criticized as a member of Obama's administration - a charge even the president joked might be enough to stop Huntsman before he even starts.

"I'm sure that him having worked so well with me will be a great asset in any Republican primary," Obama said with laughter at the White House last month.

Huntsman's support for same-sex civil unions similarly may leave him viewed as too moderate for some conservative activists who demand orthodoxy.

Huntsman's supporters have been calling would-be staff and allies, trying to assemble a campaign-in-waiting should the former governor seek the White House. Leading the effort is John Weaver, a veteran Republican strategist and one-time senior adviser to Sen. John McCain's presidential efforts. Those interested in helping Huntsman win the Republican nomination and then the White House say this is all happening independent of Huntsman, who has not ruled out a presidential run but has done little to tamp down speculation.

Gibbs dismissed suggestions that Huntsman's status as a potential candidate could undermine his role as the administration's representative in China.

"The president and the American people expect that somebody who holds the post of ambassador from the United States to China would dedicate their full energy and time to that position," Gibbs said. "And we believe that ambassador Huntsman believes that as well."

If Huntsman were to run, he would confront the same problems that challenged fellow former Gov. Mitt Romney of Massachusetts: their shared Mormon faith. Iowa's caucuses, traditionally the first held, are dominated by conservative Christians who have concerns about casting a vote for a Mormon. That concern prompted Romney in late 2007 to deliver a speech about his faith, similar to candidate John F. Kennedy's address about his Catholicism in 1960.

The same holds true in South Carolina, which is equally as conservative and swayed by evangelical Christians. But without a serious Democratic challenge expected for Obama and a primary that doesn't discriminate by party, Huntsman allies suggest moderate and independent voters could elect to participate on the GOP side of the primary.

The pathway to the nomination, Huntsman's supporters say, starts in New Hampshire and then continues to South Carolina, then Michigan and Nevada, which has a large Mormon population but could split in their support with the Michigan-born Romney, who ran in 2008.

By emphasizing his record as governor and manager, Huntsman could appeal to the large swaths of moderate or independent voters who may fear a nominee from the far right of the party might fail in a bid to unseat Obama.

As China becomes a powerful economic rival to the United States, Huntsman's backers say his diplomatic assignment and knowledge of the Asian nation could serve him well with voters.

Huntsman's allies suggest he would stay in Beijing through April, set up an exploratory committee and make an announcement in early summer, perhaps after the close of the second-quarter fundraising records are released in July. By then, Republican primary voters will have had a chance to assess the early entrants in the GOP field and may clamor for another option.