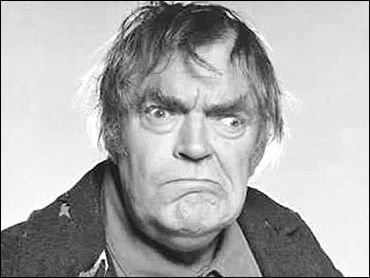 Jack Elam, a character actor and favorite Western villain who menaced good-guy cowboys with his crazy grin, wild eyes and remorseless gun-slinging in films such as "Rawhide" and "Wichita," has died, a family friend said.

Elam, who had been in declining health in recent years, died Monday afternoon at his home in Ashland, Ore., of unspecified illness, according to longtime friend Al Hassan.

Most biographies list the actor as 86 years old, but Hassan said he was actually 84, having lied about his age as a youngster to get work.

"He was cantankerous in a great way, in a funny way," Hassan said. "He smoked, drank, all that stuff. He lived one of the best lives I've ever seen."

He helped arrange financing for the Robert Preston film "The Sundowners" in exchange for a larger role, as the husband of actress Cathy Downs. Then came a tough-guy part in 1951's "Rawhide," starring Tyrone Power, which helped make him a star.

Elam, born in Miami, Ariz., didn't always play the mean old hombre — he also found himself cast as dirty old men and harmless drunks, sometimes with a humorous bent in comedies like "Support Your Local Sheriff" and "The Cockeyed Cowboys of Calico County."

The actor's own cockeye was the result of a childhood fight in Phoenix. The way he told it, a fellow Boy Scout stabbed him in the left eye with a pencil during a scrape at a troop meeting. He remained blind in that eye, which wandered lazily around its socket.

Elam continued working into his later years in such films as "Suburban Commando" (1991) and the TV reunion shows "Bonanza: The Return" (1993) and "Bonanza: Under Fire" (1995), his last screen credit.

But he complained about the modern villains that evolved in the 1970s, who had shades of psychological problems behind their bad behavior. "The heavy today is usually not my kind of guy," he said in the Los Angeles Times in 1977.

"In the old days, Rory Calhoun was the hero because he was the hero and I was the heavy because I was the heavy — and nobody cared what my problem was. And I didn't either," he added. "I robbed the bank because I wanted the money ... I've played all kinds of weirdos but I've never done the quiet, sick type. I never had a problem — other than the fact I was just bad."

Elam was inducted into the Hall of Great Western Performers of the National Cowboy and Western Heritage Museum in 1994.