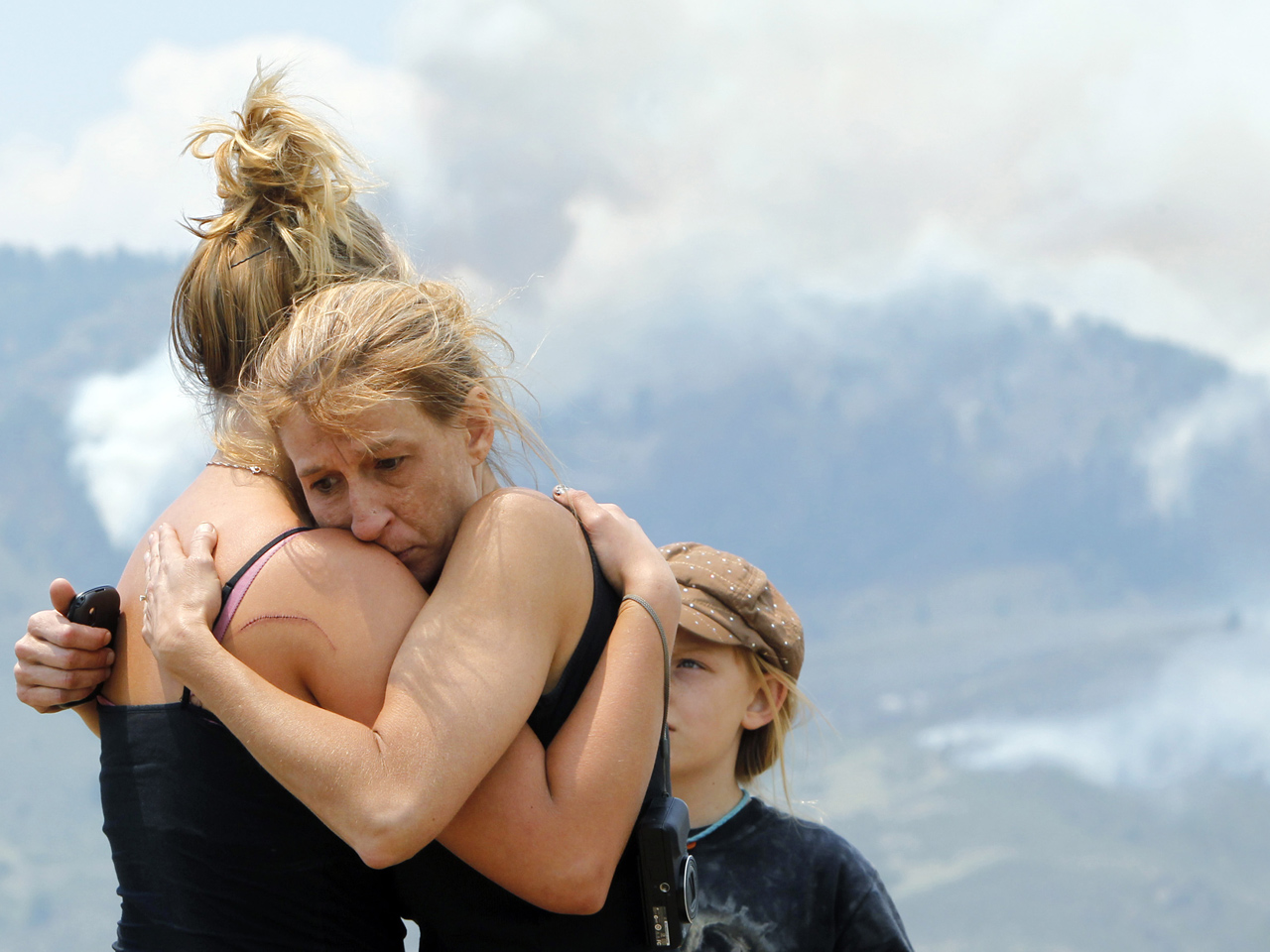 Wyoming diverted personnel and aircraft from two fires there to help with a 60-square-mile wildfire in northern Colorado. Canada also loaned two aerial bombers to fight the Colorado blaze following the recent crash of a U.S. tanker in Utah. And an elite federal firefighting crew arrived to try to begin containing a fire that destroyed at least 118 structures.

All told, about 600 firefighters will be battling the fire some 15 miles west of Fort Collins by Tuesday, said incident commander Bill Hahnenberg. "We are a very high priority nationally. We can get all the resources we want and need," he said.

The U.S. Forest Service said late Monday it would add more aircraft to its aerial firefighting fleet, contracting one air tanker from the state of Alaska and four from Canada. Two more air tankers were being activated in California.

The announcement came after Colorado's U.S. House congressional delegation demanded that the agency deploy more resources to the fire, which was zero percent contained and forced hundreds of people to abandon their homes. The Larimer County Sheriff's Office said it confirmed one person died in the fire — but did not say whether the victim was a person previously reported missing.

In a letter to the Forest Service, Colorado's congressmen said the need for firefighting aircraft was "dire." Colorado U.S. Sen. Mark Udall urged President Barack Obama to sign legislation that would allow the Forest Service to contract at least seven large air tankers to add to its fleet of 13 — which includes the two on loan from Canada.

The temporary additions to the firefighting aircraft fleet will make 17 air tankers available to the forest service, which has deployed 10 air tankers, 62 helicopters and 4,000 personnel to more than 100 fires nationwide.

One of the region's most potent aerial firefighting forces — two Wyoming Air National Guard C-130s fitted to drop slurry — sat on a runway in Cheyenne, 50 miles north of the Colorado fire. The reason: The Forest Service, by law, cannot call for military resources until it deems that its fleet is fully busy. It also takes 36 hours to mobilize the crews and planes, officials said.

"They just haven't thrown the switch yet because they feel like there are adequate resources available," said Mike Ferris, a spokesman for the National Interagency Fire Center in Boise, Idaho.

Meanwhile, helicopters were used to suck water from a reservoir and drop it on nearby homes dangerously close to the flames.

Evacuees expressed gratitude for the help.

"They're doing the best they can," said Barb Hermsen as she watched a helicopter make daring raids through smoke and flame to protect homes. "We know how much they have to go through, and where they're going — man, it's crazy."

In New Mexico, firefighters got new air and ground support to battle a fast-moving wildfire that charred tens of thousands of acres and forced hundreds of residents to leave their homes in the southern part of the state.

Smoke filled the air in the mountain community of Ruidoso as evacuees gathered at a high school gymnasium to get an update on the lightning-sparked fire in the Sierra Blanca mountain range. The blaze exploded over the weekend and reached more than 54 square miles by Monday.

An estimated 35 structures have been damaged or destroyed by the blaze, and fire managers expect that number to grow once damage assessments are done.

Elsewhere in New Mexico, firefighters made slow progress against the largest wildfire in state history. The blaze has charred 435 square miles of forest since it was sparked by lightning in mid-May, and was 37 percent contained Monday.

Arizona's state forestry division dispatched two water tenders and 15 fire trucks to New Mexico, which also welcomed the arrival of a DC-10 jetliner that can lay a 100-yard-wide, mile-long line of retardant or water.

"It's a balancing game," Jaycox said.

At least 18 large wildfires are burning in nine U.S. states, forcing the reshuffling of fire crews and aircraft. The National Interagency Fire Center in Boise, Idaho, said 4,000 of 15,000 federal firefighters are currently deployed at fires around the country.

"We have enough resources at this time to be able to deal with the fires we currently are dealing with and what we expect to have to deal with the rest of this fire season," Tidwell told The Associated Press last week. He emphasized that the agency has the authority to transfer funds from other accounts to meet firefighting costs in any given year.