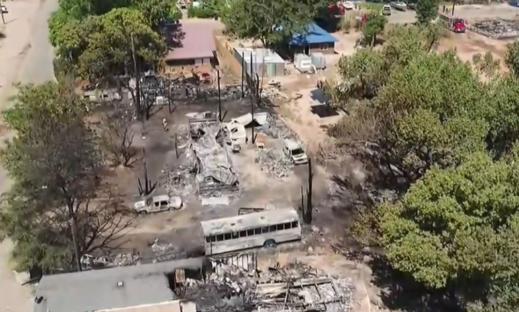 DENVER -- A fast-moving brush fire destroyed eight homes in the Utah tourist town of Moab, while more than 3,000 people in Colorado and Wyoming fled multiple wildfires scorching the drought-stricken U.S. West on Wednesday. The blaze in Moab, known for its dramatic red rocks, started in a wooded area Tuesday night and quickly spread to homes over less than a square mile, Police Chief Jim Winder said. Crews were extinguishing embers Wednesday.

Moab residents Tim Clark and his girlfriend Tina Saunders grabbed their dogs, family photos and a laptop, evacuating with their home in flames.

Police said the early investigation has ruled out natural causes for the blaze that ignited near a creek that is frequently used as a walkway in a largely blue-collar neighborhood. It was not near the tourist-heavy areas in the town known for its proximity to Arches and Canyonlands national parks.

Moab resident Shane Tangren told the newspaper that he arrived home from work Tuesday evening to find flames nearby. He was trying to protect the house he's lived in since he was 16 by wetting it down, but the wind shifted and sent the flames barreling right toward him. He fled.

"I sat there and watched it burn to the ground," Tangren, 55, told the newspaper. "Everything - photographs, birth certificates, memories - it's all gone. My first car - that was a 1970 (Pontiac) GTO. Up in flames. I bought it when I was 15."

A local inn, The Gonzo Inn, also offered vacant rooms to those affected, continuing to assist victims with lodging after rooms had been filled, CBS affiliate KUTV reported.

In Colorado's mountains, residents have evacuated more than 1,300 houses - condos, apartments and pricey homes - as flames threatened an area known for its ski resorts. Firefighters, with help from aircraft, got a quick jump on a fire near Silverthorne after it was reported Tuesday and have managed to keep it from spreading beyond about 91 acres in heavy timber, including trees killed by pine beetles.

Evacuated residents in the area were allowed to go to their homes for a short time to gather what they need before leaving again, CBS Denver reported.

Summit Fire Chief Jeff Berino said Wednesday night that lightning did not play a role in the fire and that "some type of human element is probably likely" as a cause.

Since 2006, the U.S. Forest Service has created a 900-acre buffer between the houses and the trees there, CBS Denver reported.

Across the state, Colorado's largest fire has burned about 43 square miles over nearly two weeks. Residents could go back to about 180 homes no longer threatened at the northern edge of the fire Wednesday, but others remained out of more than 1,900 houses.

The blaze about 13 miles north of Durango is in the Four Corners region where Colorado, New Mexico, Arizona and Utah meet and which is in the middle of a large swath of exceptional drought. Much of the U.S. West is experiencing some level of drought.

Colorado Gov. John Hickenlooper said the rapid response from emergency crews has helped prevent a repeat of devastating wildfires in 2012 and 2013. Years ago, he said fire departments were hesitant to commit resources to fighting every fire, and launching a coordinated response to a major blaze could take up to two days.

Hickenlooper said better coordination has cut down on delays, and the state reimburses local departments for initial response costs, in an attempt to control a blaze before it can spread.

"We learned a lot from the disasters, the fires we had in 2012 and 2013," Hickenlooper told reporters.

Meanwhile, a wildfire in Wyoming's Medicine Bow National Forest doubled in size over 24 hours, burning about 8 square miles. Nearly 400 seasonal and permanent homes have been evacuated because of the fire near the Colorado border.

The fire has destroyed some structures, but investigators have not said how many or what type.

The situation was better in central Washington, where authorities lifted evacuation orders or warnings for about 50 residents as crews work to contain a wildfire burning grass and brush.

Officials said one small outbuilding was lost but no injuries have been reported.