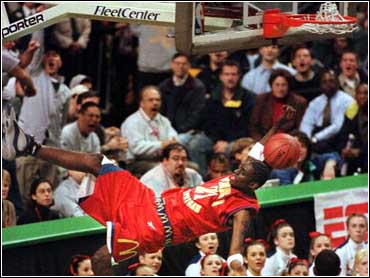 Zach Randolph and Marcus Taylor led the West to a 146-120 win in the McDonald's All America high school game Wednesday night. In the fall, they take their show to Michigan State.

And that may add four years to a budding dynasty in Lansing, Mich.

"It's going to be great stepping in next year" on a team which plays Saturday in its second straight Final Four, Taylor said. "We have big shoes to fill but if we work hard I think we can do it."

With seniors Mateen Cleaves and Morris Peterson leaving, Taylor could take over at point guard and the 6-foot-9, 270-pound Randolph should provide inside power.

They handled their jobs very well Wednesday as the West broke the record for most points by one team set last year in the West's 141-128 win over the East.

Randolph was the game's MVP Wednesday with 23 points and 15 rebounds, while Taylor had 14 points, six rebounds and three assists in a run-and-gun game.

"Marcus and I play well together. He's a good point guard, plus he's a scorer," said Randolph, from Marion (Ind.) High School.

Taylor, who lives eight minutes from the Michigan State campus, said he and Randolph decided two years ago to attend the same college.

On Saturday, they'll be in Indianapolis watching the Spartans play Wisconsin in an NCAA tournament semifinal.

"This is their fourth time playing each other," Taylor said. "Hopefully, Wisconsin isn't too used to their offense."

There was plenty of offense Wednesday night in a game of fastbreaks, quick shots and enough alley-oops to fill a highlight reel.

It was a record-shattering night at the FleetCenter featuring 24 of the top high school seniors in the country chosen by a seven-member selection committee and an advisory panel of scouts and media members.

Darius Rice led the East with 24 points. He had 20 at halftime, more than halfway to the record of 31 set in last year's game by Jonathan Bender.

"In the first half, I thought I could hit 40," said Rice, a Mississippi high schooler who is leaning toward Kentucky, "but then no one passed me the ball."

The West's DeShawn Stevenson, who will attend Kansas, led all scorers with 25 points as he hit 12-of-19 shots in just 25 minutes. He won the slam-dunk contest Monday night.

Rice, a nephew of NFL wide receiver Jerry Rice, made 9-of-18 shots in 24 minutes.

The West led 37-32 after one quarter and 74-63 at the half. It scored the first 10 points of the fourth quarter on 3-pointers by Alton Ford, who plans to attend Houston, and Taylor, a dunk by Travon Bryant and a layup by Chris Duhon.

The West led 106-85 after three quarters, and Randolph and Taylor made sure the East wouldn't come back, scoring their team's first seven points of the fourth period for a 113-87 advantage.

The crowd missed the FleetCenter record of 20,153 set Dec. 9, 1995 in a game between Boston College and Massachusetts.