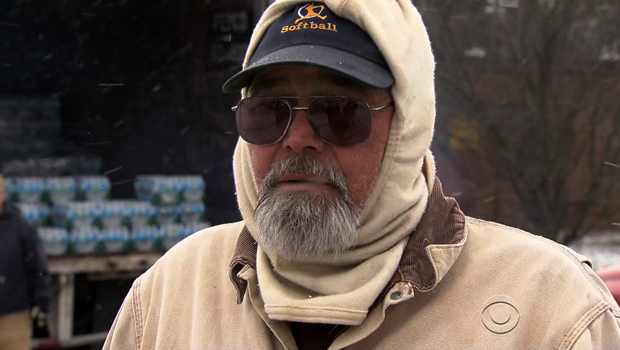 CHARLESTON, W.Va. -- This week, the 300,000 people affected by a chemical spill that contaminated the water supply in and around the state capital of Charleston were told their water was once again safe enough to drink.

One problem: The people here can still smell the chemical odor.

Water restrictions were lifted there on Thursday, but then, a day later, the 1,200 residents of this town were advised not to drink and to limit contact with the water when water company tests came back above acceptable levels.

Now, after another round, they say the water's fine.

Confused? So is Gary Tucker, who says he doesn't know who or what to believe. And he's the town's mayor.

"Right now I don't trust anybody as far as this water's concerned," said Tucker. "I'm not so sure they know what they're dealing with. As long I can smell this stuff, I'm not about to use it for anything."

At one distribution center, the bottles keep freezing and the spout on the tanker has to be covered up.

It's not clear how harmful the chemical - known as MCHM - is.

While the warnings have lifted, emergency rooms in Charleston continue to see patients with rashes and stomach aches, but hospital staff believe some of the cases are "fear driven" because people are so concerned.

"I'm not cooking with this water; I'm not drinking this water," said Jenni Burns, a Charleston business owner.

What is it going to take for her to trust the drinking water here again?

Independent researchers are gathering water samples, and residents are being advised to flush their pipes as often as possible.

The state's top health officials say that people have to trust what the science is telling them, that the water is safe. But they also acknowledge that it's difficult to instill confidence when so little is known about that chemical.