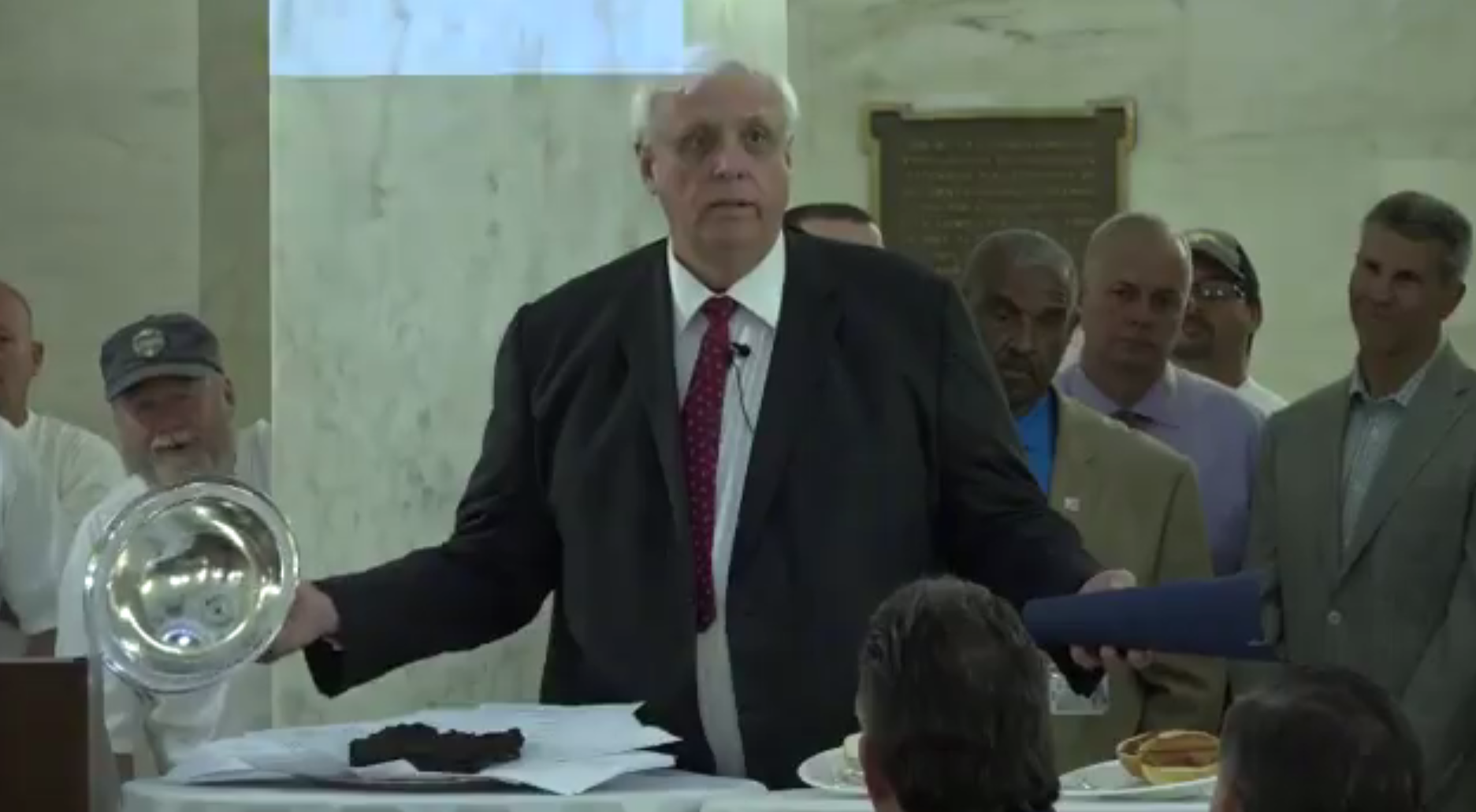 West Virginia Gov. Jim Justice brought a prop with him on Thursday to describe the budget -- a literal pile of “bull you-know-what” ahead of vetoing the state budget that was approved last weekend by the Republican-controlled Legislature.

At a news conference at the Capitol, the Democratic governor brought three silver trays. Revealing a “nothing burger” (buns with no burger) under one and a “mayonnaise sandwich” under the second, he said “we all should take credit for this” before he lifted the lid off the third tray to reveal animal feces.

“What we have is nothing more than bunch of political bull you-know-what,” he said to laughter and cheers.

“For that very reason, I’m signing my name on the budget veto, and I hope and pray that the silliness will stop and we’ll do the right thing.”

He posted a video of the conference on his Twitter page.

The lawmakers’ proposed budget would cut support for the state’s colleges and universities and Medicaid for low-income residents. It also would apply $90 million from the state’s rainy-day fund to help close a projected budget deficit.

Justice proposed smaller cuts, plus increases in sales and gasoline taxes, which he said were included in the tentative Saturday night deal. The first-term governor’s compromise also would have cut the state income tax, something Republican lawmakers were pushing.

“There’s something that goes on in this great building that I don’t like,” Justice said at his news conference. “They seem to think it’s OK to not tell the truth. They think, ‘We can just not tell the truth and that’s just politics. And we think we can play games and it’s politics.’ ... But you know at the end of all the games ... there’s a family out there, and we’re hurting them.”

His proposed 4.5 cents-a-gallon gas tax hike would help fund bonding for road reconstruction, a signature program of Justice’s that he has said would create thousands of jobs.

The lawmakers’ approved Medicaid cut, the attendant loss of federal matching funds and other cuts would have cost West Virginia’s health programs $178 million, Justice said. “Out of our state economy - gone.”

House Speaker Tim Armstead and Senate President Mitch Carmichael had both urged the governor to sign the Legislature’s budget bill into law. The new fiscal year starts July 1. The state faces a deficit in the coming year that has been estimated at up to $500 million.

Lawmakers now will have to return to try to resolve the disagreement. They need two-thirds support to override the veto.

“The governor needs to accept the reality that his tax increase proposals simply do not have the support of the vast majority of elected representatives in the Legislature,” Armstead said Sunday following the budget vote. “He should sign this budget and then begin working with us as we continue our efforts to streamline our government.”

A House analysis describes legislators’ $4.1 billion general revenue budget as $60 million lower than the current budget. Its $29.8 million cut in higher education would have included 12 percent cuts in support to Marshall and West Virginia universities. Public broadcasting would have lost $1 million. The state health secretary would have some flexibility to manage the proposed $48.6 million Medicaid cut through timing of payments and other unspecified measures, it said.

“While I realize this budget is not what the governor wants, I believe it’s a budget that is rooted in reality,” Carmichael said two days later. “We cannot continue to spend taxpayer dollars at the same level while our revenue collections decrease.”

Justice said Thursday that Republican lawmakers have been asking about his expected veto, which would let them avoid blame for any tax increases. And minority Democratic lawmakers backed away from the tentative deal because they didn’t want Republicans to get credit for tax reform.

Carmichael said later he doesn’t believe the House would agree to Justice’s plans. Carmichael said any compromise must include comprehensive tax reform.