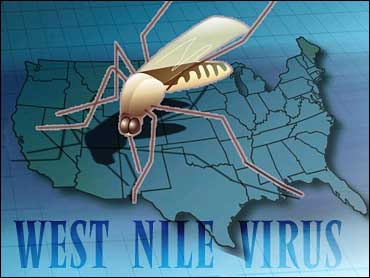 Mosquito season is here, but it is still hard to predict where West Nile virus will hit and how hard.

In Arizona, a 74-year-old woman died from the virus last week, the first reported death from the virus this year. Local officials and the Centers for Disease Control say Arizona is in the middle of an epidemic with 48 reported cases of West Nile virus. California reports 10, followed by New Mexico with 3.

Dr. Emily Senay tells The Early Show co-anchor Rene Syler the severity has to do with local conditions, like standing water, that are difficult to track. The CDC says it expects West Nile virus will hit many of the same states it did last year, but they can't tell us when or how hard.

Chances that you're going to get sick from a single mosquito bite are extremely low. The CDC estimates that 80 percent of those who become infected with the virus never know they have it. They never develop any symptoms.

About 20 percent will develop what's called West Nile Fever, flu-like symptoms such as headache, fever, and muscle-aches. The only way to really know for sure that it's West Nile is by doing a blood test. Now, fewer than one percent of those infected will develop a serious version of the virus called West Nile Neuro Invasive Disease. This is the kind that you hear about on the news. It can cause inflammation of the brain and spinal cord and can be life threatening.

The risk of severe illness and death is highest for people over 50 years old. People of all ages can become ill, but the real risk is for the older population.

The best way to prevent West Nile virus, is to avoid mosquito bites. It's a good idea to wear long sleeves during peak mosquito biting hours, which are from dusk to dawn, and to spray an insect repellent containing DEET directly onto your clothes and on any exposed skin. Keep in mind that mosquitoes can bite through thin clothing, so insect repellent can make a big difference. Even if you're outside only a short time, it only takes a second for that mosquito to find you and bite.

The following are things you can do to help prevent West Nile virus from spreading in your own neighborhood:

Mosquito-proof your home. Mosquitoes lay their eggs in standing water. So, you want to drain any standing water from around your home. You'll want to empty your kids' backyard pools, garbage cans and receptacles that have collected rain water, any bottles left laying around, and any puddles. Check all around your house. Chlorine does a good job of keeping mosquitoes out of pools - so, you've got to make sure to treat your pool and maintain it. Of course, problems arise when there's a neglected pool in the neighborhood and those mosquitoes attack everyone.

Encourage your neighbors to check their homes for standing water and take care of their pools. You also want to keep those mosquitoes out of the house. We've all woken up at some time or another and discovered a mosquito in the room where we slept had attacked us during the night.

Make sure windows and doors are protected with well-fitted screens with no holes. And go over to Grandma and Grandpa's house and help them do the same things.