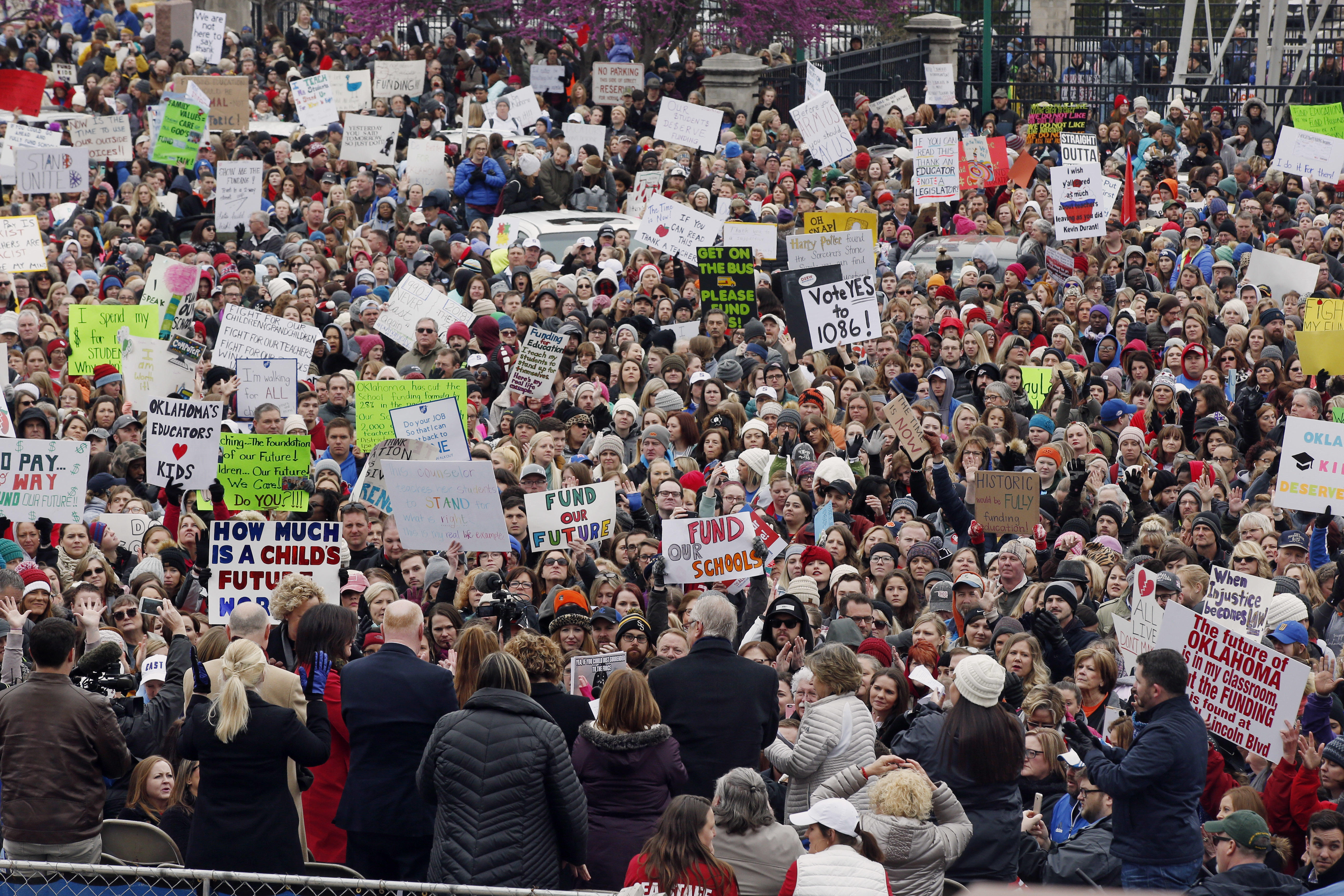 A day after 36,000 Oklahoma teachers took part in a massive walkout demanding higher pay and an increase in school funding, the music teachers among them picked up their instruments and blasted out an unlikely anthem: "We're Not Gonna Take It" by Twisted Sister.

"If I didn't have a second job, I'd be on food stamps," Rae Lovelace, a single mom and a third-grade teacher at Leedey Public Schools in northwest Oklahoma told CBS News. She works 30 to 40 hours a week at a second job teaching online courses for a charter school, and she isn't alone.

Inside the state capitol on Tuesday, hundreds of teachers booed as members of the Oklahoma House adjourned without taking up Senate-approved revenue-raising measures for public school classrooms. And outside, protesters let their brass instruments do the talking.

Thanks to its catchy and direct refrain, teachers in Kentucky, New Jersey, West Virginia and Pennsylvania have also taken up the metal anthem as a sort of rallying cry over the past several months, prompting Twisted Sister frontman Dee Snider to tweet about the peculiarity of the song choice.

"While I totally support underpaid teacher's cause, it is kind of weird that a song that was on the "Filthy 15" is now every oppressed groups battlecry," the singer wrote on Twitter.

"We're Not Gonna Take It," released in 1984, was Twisted Sister's sole Top 40 hit. And while Snider originally penned it as an anthem of rebellion against adult authority, the classic rock hit has actually seen its fair share of political action.

In 2012, when House Speaker Paul Ryan was running on the Republican presidential ticket with Mitt Romney, he used "We're Not Gonna Take It" at campaign stops, until a disgruntled Snider eventually put a stop to it.

"I emphatically denounce Paul Ryan's use of my band Twisted Sister's song, 'We're Not Gonna Take It,' in any capacity," the singer said at the time. "There is almost nothing he stands for that I agree with except the use of the P90X," he added, referring to Ryan's favored workout regimen.

When President Trump launched his run for the White House, he asked Snider's permission to use the song as exit music at his rallies, and Snider (a former contestant on "Celebrity Apprentice") initially agreed. The singer later retracted his permission upon hearing Trump's positions on several issues.

"When Donald started running for office, he asked me," Snider told CNN. "He says, 'Can I use the song?' And he's a buddy. And I said, 'Yeah. Go ahead.' But as the months went on, I heard a litany of his beliefs that I'd never discussed with him. I finally called him, and I said, 'Man, you've gotta stop using the song. People think I'm endorsing you here. I can't get behind a lot of what you're saying.' … He has not used it since."

Thus, while Snider may consider the song an odd anthem for the teachers' movement, it has certainly been tapped as a rallying cry in the past, transitioning somewhat seamlessly from big hair to big issues ... from MTV's "Headbangers Ball" to the political arena.