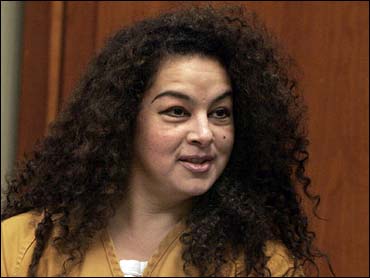 A man who lost part of his finger in a workplace accident was the source of the fingertip used in an alleged scam against Wendy's restaurants, and gave it away to settle a debt, his mother said.

"My son is the victim in this," Brenda Shouey said in an interview published in Wednesday's San Francisco Chronicle. "I believe he got caught in something, and he didn't understand what was going on."

Anna Ayala, 39, was arrested April 21 at her Las Vegas home on suspicion of attempted grand theft for allegedly costing Wendy's millions of dollars in a plot to shake down the company by claiming she found the finger in a bowl of chili in a restaurant in San Jose.

Ayala was to be arraigned Wednesday afternoon.

Shouey, of Worthington, Pa., said her son, Brian Paul Rossiter, 36, of Las Vegas, lost part of his finger in December in an accident at a paving company where he worked with James Plascencia, Ayala's husband. His hand got caught in a mechanical truck lift, she said.

She said he gave it to Plascencia to settle a $50 debt.

San Jose police announced last week the finger was obtained from an associate of Plascencia, but they have refused to identify him because he is cooperating in the investigation. They did not immediately return a message Wednesday seeking comment on the newspaper's account.

Shouey said her son had showed the severed finger to co-workers in a macho display of humor and was desperate for cash when he gave it away "to this character, James."

"My son is a happy-go-lucky guy. He thought it was cute to show" the severed finger, Shouey said. "It's like a man thing."

Shouey declined to give details of how the finger was preserved or whether Rossiter knew why Plascencia allegedly wanted the finger. She said her son told her of his role only this week and is keeping a low profile after undergoing intense police questioning.

Plascencia was arrested earlier this month on unrelated charges of failing to pay child support in a previous relationship.