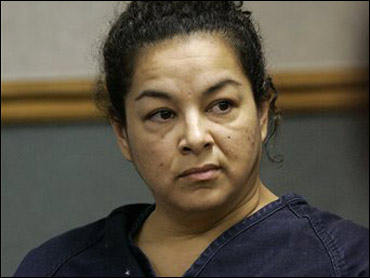 The woman who was arrested after claiming she bit into a human finger in a bowl of Wendy's chili waived extradition Tuesday, telling a judge she was eager to return to California to face charges.

Anna Ayala, 39, appeared before the same judge who issued a warrant for police to search her home outside Las Vegas on April 6. Records from that raid are sealed.

"Anna says they're ridiculous," Ehler said of the charges of attempted grand larceny. "She's eager to go back to San Jose."

Ayala was arrested late Thursday, and San Jose police on Friday called her claim a hoax. Authorities said the attempted grand theft charge relates to millions in dollars of financial losses Wendy's International Inc. has suffered since news broke of her claim.

Ayala is being held without bail by Nevada because she is considered a fugitive from California, reports the San Jose Mercury News. Las Vegas Justice Court Judge Douglas Smith said she can expect to be returned to California within 30 days, but attorneys said that may occur as early as this week. When she returns to California, she will be jailed in lieu of a $500,000 bail bond.

"They're saying that she intentionally caused the damage that Wendy's is claiming, $2.5 million," Ehler told CBS Affiliate KLAS-TV. "I think it's ridiculous."

"It concerns me because it's difficult for bail purposes and it also exposes her more to prison time," he said.

Ayala maintains she bit down on a 1½ inch-long finger fragment while dining March 22 with her family at a Wendy's in San Jose. She has denied placing the digit in her bowl.

She hired a lawyer and filed a claim against the franchise owner, but dropped the legal fight shortly after police searched her home.

Ayala, who has maintained her innocence, faces a maximum seven-year sentence if convicted of the larceny charges, and at least another 16 months if convicted of unrelated charges that she allegedly bilked a woman $11,000 over a soured real estate deal two years ago.

Ayala has been involved in nearly a dozen legal battles, including a sexual harassment suit against an employer, an auto dealer over a car and even another fast-food chain for food poisoning.

Authorities have not yet identified who the finger belonged to or Ayala's connection to it.

A person with knowledge about the case who spoke on condition of anonymity said the finger charge stemmed from San Jose police interviews with people who said Ayala described putting a finger in the chili, statements bolstered by authorities announcing last week that it did not appear the finger had been simmering in chili.

The company maintains that the finger did not enter the food chain in its ingredients. Employees at the San Jose franchise have all their fingers, and no suppliers of Wendy's ingredients reported any hand or finger injuries, the company said.

Wendy's, based at Dublin, Ohio, is offering $100,000 for information leading to the origin of the finger.