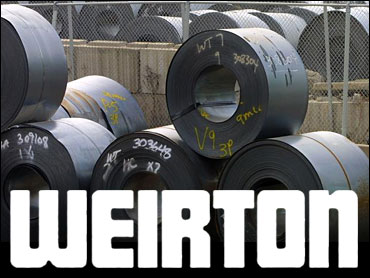 If approved, the long-anticipated purchase would expand the nation's No. 2 integrated steelmaker to include Weirton's tin mill, one of the largest in the United States.

The deal also would end a labor legacy at the West Virginia plant, once the largest American company owned 100 percent by its workers.

"Our goal has been to secure the best possible solution for all of our stakeholders and to maintain a steel operation in Weirton," Wise said in a statement released early Wednesday morning. "We believe ISG provides the answer.

"Under ISG, Weirton Steel should be able to compete more effectively in the world market."

Weirton Steel, the nation's fifth-largest integrated producer and No. 2 producer of tin, sought Chapter 11 protection in May 2003 after losing money for five years.

It has struggled ever since to emerge, unable to appease creditors or strike a new labor agreement with its 2,700-member Independent Steelworkers Union.

The company was further hurt in recent weeks by the ongoing global shortage of coke, the fuel used for its two blast furnaces. As its supply ran out, Weirton began closing some rolling and finishing operations, then idled one furnace. That resulted in some 800 layoffs.

Coal prices have doubled in the past year, and prices for other raw materials have also risen. With more than half of U.S.-produced steel now made from melting junked cars, refrigerators and other steel products, prices for some high-grade scrap are approaching $300 a ton, compared to less than $200 a few years ago.

Within days, Weirton will file the details of ISG's offer with the U.S. Bankruptcy Court in Wheeling, where a judge will then solicit other bids. It may take as long as 45 days to finalize the sale.

While the buyout would keep steelmaking alive in Weirton, it is bad news for some 10,000 retirees, dependents and surviving spouses who had relied on the company for insurance coverage.

"Obviously, we are saddened to report that we will no longer be able to pay for retiree health care and life insurance programs," Wise said. "This decision was extremely difficult but unavoidable. We sincerely regret the series of circumstances that led to this situation."

Weirton's strategy for remaining a stand-alone company had called for the creation of a Voluntary Employee Beneficiary Association that required premiums for enrollees 65 and older.

Many retirees have complained they accepted lower wages in their younger years in exchange for the promise of free, lifelong health care.

"We understand our retirees' expectations," Wise said. However, he said those promises were made at a time when health costs were lower and the company's fiscal position was stronger.

"Unfortunately, those conditions no longer exist," he said. "But unlike many other companies that terminated retiree insurance programs, we were able to provide these programs during the nine months we have been in bankruptcy."

Weirton executives and union leaders had hoped to keep the company an independent mill as long as possible, banking on a $145 million loan package approved last fall by the federal Emergency Steel Loan Guarantee Program.

But both had simultaneously pursued a sale, with ISU President Mark Glyptis repeatedly calling ISG "a very good fit."

ISG can cast more than 18 million tons of steel a year and has created a new model for efficiency, dramatically slashing the number of workers and their wages to cut production costs.

In December, it sold 16.5 million shares of stock in an initial public offering, raising $462 million.

The company has plants in 10 states, including facilities in Cleveland and East Chicago, Indiana, that make flat-rolled steel. It also runs a finishing plant in Hennepin, Ill., and a coke plant in Warren, Ohio.

The deal comes at a time of rising steel prices and a steel shortage in the U.S., caused by a weak dollar which has depressed imports, as well as price hikes and shortages of raw materials blamed on high consumption of raw materials by China.