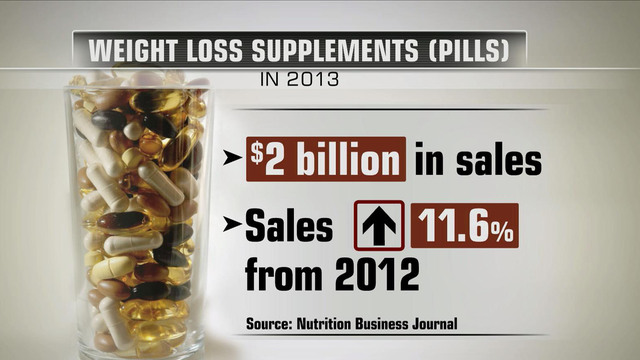 A new year is fast approaching and, according to Marist Poll, losing weight is the most popular New Year's resolution for 2015. In an effort to spur results, some turn to weight loss supplements, supplements that are not regulated by the Food and Drug Administration (FDA) and can even be dangerous.

Last year, according to Nutrition Business Journal, Americans spent $2 billion on weight loss supplements, a figure that increased 11.6 percent from 2102.

With all of the buzz around weight loss, on Tuesday, Consumer Reports announced the findings of their new survey that revealed many Americans are misinformed about the safety and efficacy of diet and weight loss supplements.

"About a quarter of people in our survey thought that they were safe because they were natural," Consumer Reports health and food deputy editor Trisha Calvo said Tuesday on "CBS This Morning."

Many supplements couldn't be farther from natural. In fact, Harvard Medical School and Cambridge Health Alliance's Dr. Pieter Cohen, M.D., found that 27 dietary supplements were still on the market between eight to 52 months after they were banned by the FDA. Furthermore, two-thirds of those sold for weight loss still contained banned ingredients.

The Consumer Reports survey found evidence that these supplements are not safe. Nearly half of the respondents reported side effects, including jitteriness, rapid heart rate and dry mouth, and 36 percent said they were taking the supplement at the same time as a prescription drug.

Like many supplements, those for weight loss are not regulated like medications and therefore do not have to endure the same FDA scrutiny. Promises in commercials and on bottles may not necessarily be true.

"They're allowed to make claims about the way the body functions, but not about disease," Calvo said. "So they can say something like, burns fat, but they can't say reduces the risk of obesity because obesity is the disease."

Those who believed their bodies reacted as the supplements claimed may have had another source of success. In the survey, 85 percent of the respondents who reported they experienced lost some weight were following an exercise or diet plan.