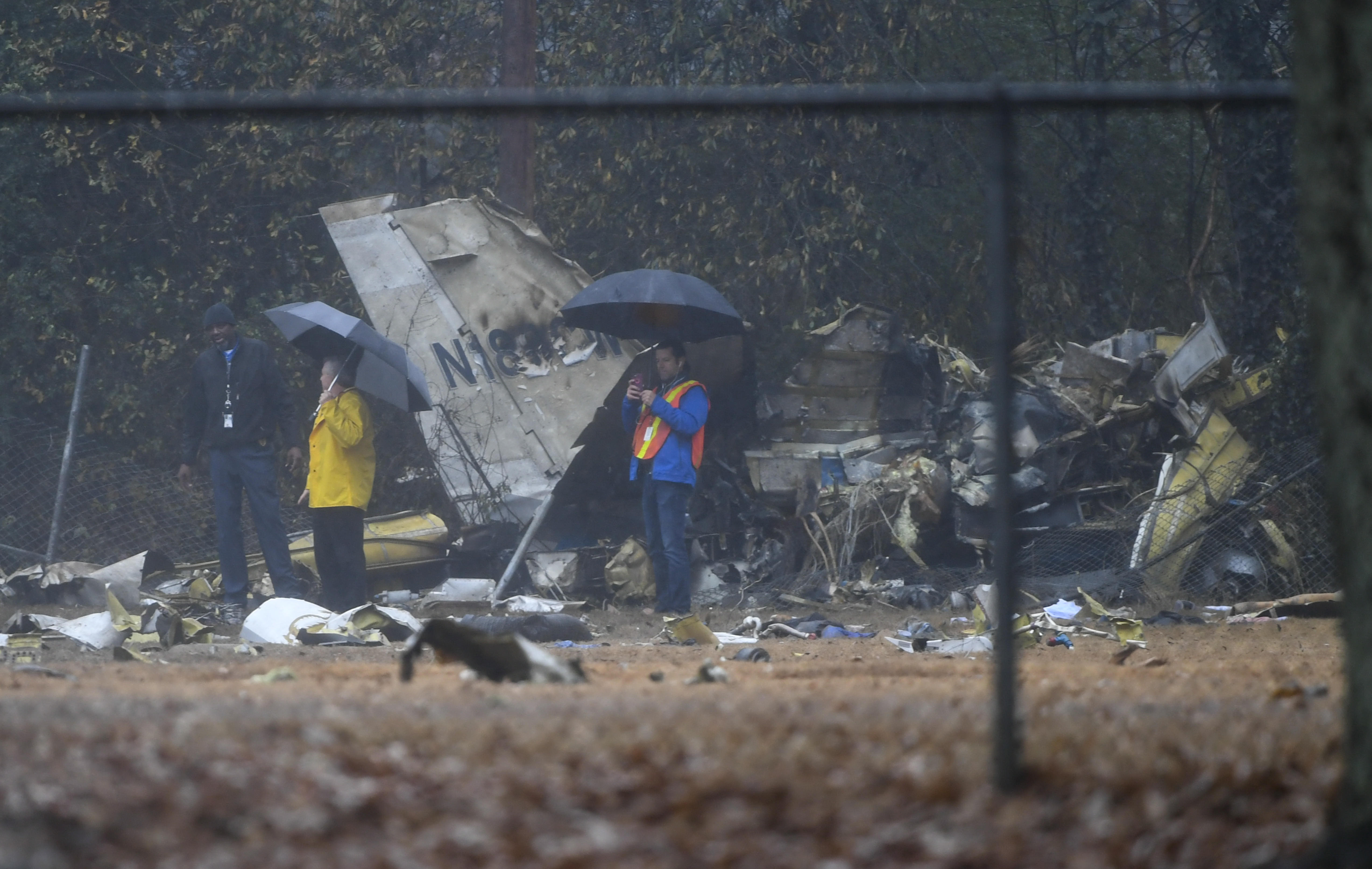 Atlanta -- A Tennessee-bound business jet crashed Thursday, killing all four people aboard, when it plunged into a football field at an Atlanta park, igniting its fuel and sending thick smoke over a nearby neighborhood, officials said. The plane is registered to Wei Chen, CEO of Sunshine Enterprises, CBS affiliate WGCL-TV reports. He was aboard the plane when it went down.

Mike McAnnally, president of a subsidiary of Chen's company, Stepup Scaffold, confirmed Chen's death to the Commercial Appeal. "He was a remarkable man, and the true American dream," McAnnally told the newspaper.

A home behind the sports field was damaged, but no injuries on the ground were reported, Atlanta Fire Rescue Sgt. Cortez Stafford said.

The plane's wreckage was spread out on the field over about 100 yards (90 meters), he said.

The aircraft was "shooting out of the sky," witness Reggie Dumas told reporters at the scene.

"As it was going down, you could see the wings shifting back and forth," said Dumas, who saw the aircraft plunge as he drove along a nearby road. He said he jumped out of his car to see if he could help anyone, but saw no survivors - only smoke.

In 2011, Chen became the first Chinese pilot to circle the globe in a single-engine plane, the Commercial Appeal reported.  Chen was named to Memphis Business Journal's 40 Under Forty in 2008.

"I hate for someone to lose their life especially around this time of year," neighbor Clarence Thompson told WGCL. "I know they have things in their heart and in their minds that they wanted to do with their families and they won't ever get to do."

The plane was headed to the Millington-Memphis Airport when it went down, airport Executive Director Roy Remington said.

Remington said a fire official at the Millington airport, located about 20 miles (32 kilometers) north of Memphis, was working with authorities in Atlanta to determine the identities of the others killed. Remington says the victims were believed to be from the Memphis area.

The jet had departed from a runway at nearby Fulton County Airport-Brown Field and went down about 1.5 miles (2.4 kilometers) east of the airport shortly after noon, Bergen said. The airport itself is about 10 miles (16 kilometers) west of downtown Atlanta.

The plane's wreckage is not far from a small set of metal bleachers and the yellow goal post in the end zone of the football field, video from WAGA-TV shows. Most of the plane is badly burned. Its tail is one of the only parts that appear to be intact.

Firefighters had to make their way through jet fuel to put out the flames on the football field, Stafford said.

The airport is a busy general aviation facility with an air traffic control tower and fire station. It averages a combined 164 takeoffs and landings each day.

The National Transportation Safety Board said it is investigating the crash.