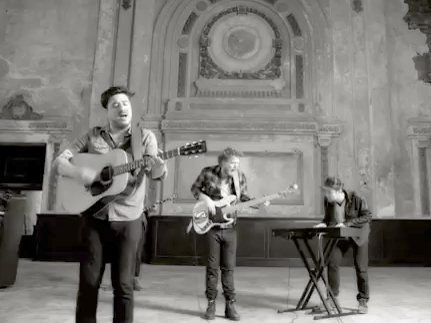 (CBS News) Happy Friday! And welcome to The Feed's Weekend Music Round-Up! And while Will may be away, we can certainly still play! Play some cool music videos, that is. And luckily we have a new video from Mumford & Sons to kick off the weekend in style. And who doesn't love Mumford & Sons? No, seriously, does anyone not like those English guys? And the band's latest video for the fourth single and title track off the Grammy-winning album "Babel" illustrates what we love best about this band.

The black and white video isn't flashy and it's not overly produced, but it is anything but boring. As a camera spans an empty music hall on a loop, the quartet rocks out with all of its might, filling the space with endless energy.

In a different direction, we move to a couple titled Us, who cover an acoustic version of Rihanna's "Where Have You Been" in their first episode of "Studio Sessions." Listen to this version stat, you won't regret it, in fact I may prefer Us' cover to the real deal. This is one talented couple, and I am definitely looking forward to episode number two.

Winnipeg pop group Royal Canoe has released a video for the song "Bathtubs," and the visuals are every bit as funky and quirky as the song (and group for that matter, and I mean that as a compliment). It's like watching a living/moving Cubist Picasso painting. The images in the video include spinning heads, disembodied appendages, a floating guitar, sliding drum kits, four-handed percussion, and much much more. Check this video out for your weekend dose of cool.

And finally, for some real kid-like, summer fun -- check out this dubstep master -- with the best 'fro I have ever seen, may I add -- knocking out some tunes on a Sony toy sampler. Dude's cool as a cucumber while doing it, too. This video certainly takes children's music to a whole new level, doesn't it? On that note, have a funtastic weekend! Looking forward to watching more videos with you all next week!