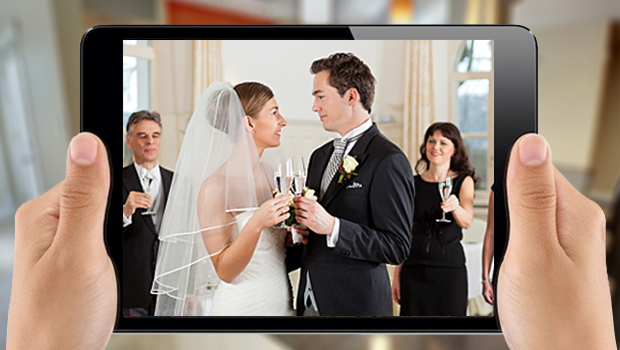 Marriage is as old of a tradition as any, but although the sentiment remains, new etiquette trends and fresh traditions are seeping into the marriages of today. From planning weddings on Pintrest to sending out "Don't Save the Dates" (yes, it's really a thing), technology and the simple passage of time has altered the face of weddings. Here's a rundown of some of the latest wedding trends and fresh new traditions.

Traditions of Days Gone By: You know that awkward time during a wedding when the DJ asks all the single ladies to head to the dance floor? Well, that practice is not as popular these days as you may think. Sarah Pease of Brilliant Event Planning said based on her experience these wedding traditions are definitely dying out. She's watched numbers dwindle in recent years; less than a quarter of the brides she has worked with toss a bouquet at the reception. And that other awkward tradition -- when grooms throw the garter -- is even less popular, she says.

But as some traditions fade away, others become more popular. For example, Pease says she's seeing an uptick in the number of brides walking down the aisle with both their mothers and fathers.

Rebecca Dolgin, editor in chief of TheKnot.com, points out that same-sex weddings have started to change the look of nuptials between a man and a woman. "Things like having the groom's side on one side of the room and the bride's side on another -- gay weddings have made that a little more obsolete," she said.

Nontraditional Readings: Insiders say more couples are getting creative with the readings their guests recite at their ceremony. One reading that has become popular stems from the court case Goodridge vs. Department of Health," the 2003 landmark state appellate court case dealing with same-sex marriage in Massachusetts and involving Supreme Court Chief Justice Margaret H. Marshall.

Dolgin said that more brides and grooms are choosing to incorporate a version of Goodridge vs. Department of Health into their ceremony. Here's an excerpt: "Marriage is a vital social institution. The exclusive commitment of two individuals to each other nurtures love and mutual support; it brings stability to our society. For those who choose to marry, and for their children, marriage provides an abundance of legal, financial, and social benefits. In return it imposes weighty legal, financial, and social obligations...Without question, civil marriage enhances the 'welfare of the community.' It is a social institution of the highest importance..."

You're Not Invited: While not widespread yet, there has been a new trend of sending out "Don't Save the Date" cards to guests that couples don't intend to invite to their weddings. Sounds a little rude, no? Although Pease hasn't experienced this with her own clients, she said she can see the logic; this could actually help guests. In essence, these uninvited guests are off the hook, especially if they're trying to decide which weddings to attend. It's not uncommon to have two weddings on the same day, so this could be one way to alleviate some of their stress.

Social Media's Impact: Social media has changed the wedding game in so many ways already and will likely continue to do so. Brides and grooms are more frequently laying out the social media etiquette rules for their big day. According to the 2013 David's Bridal survey, "The What's on Brides' Minds," 61 percent of participants said they forbid their bridesmaids from uploading photos of the bride in her dress before the ceremony, and 52 percent said they believe the bride and groom must be the first to post a picture of their wedding to a social media site. Pease noted that she has seen guests explicitly make a note in their wedding day programs discouraging guests from uploading photos to Facebook and other social media sites.

Aside from "being first," some brides and grooms also have standards for the photos they'd like posted of their wedding -- and that includes pictures taken later in the evening. Wait, but that's when the fun begins, right? Probably. And that's exactly why more and more brides want to keep those shots to themselves. No drunk shots, please.

And are you really married until you change your Facebook status? More couples are rushing to the social networking site to swap "engaged" for "married." According to David's Bridal's 2013 survey, 59 percent of brides will update their Facebook status to "married" or update their new name within a day of walking down the aisle. That's up 11 percent from 2011.

Tech Talks: A rising number of couples are using technology as part of their big day, too. Virtual wedding guests have become a trend, with couples Skyping in guests who can't attend so they, too, can be a part of the festivities. And in 2013, TheKnot.com held its first-ever live-streamed, crowd-sourced wedding. Companies such as I Do Stream and Marry Me Live offer Webcasting services to couples looking to go "live" when they say "I do."

Whether it's an old tradition or a new one, one thing to keep in mind is that at the end of the day, it's your big day. You always dreamed of throwing that bouquet at your wedding? Then go for it. You don't want friends posting photos on Facebook before you do? Then let them know. Set your own etiquette and traditions.