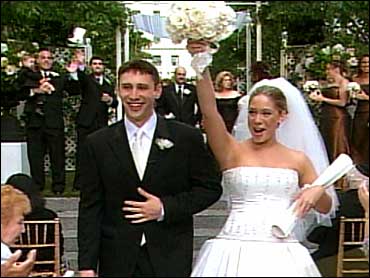 Friday was the big day for Marc Stein and Melissa Rihn, after a busy week planning their wedding with the help of experts on The Early Show.

Many of the bride and groom's friends and family gathered on The Early Show plaza to celebrate the happy ceremony while Melissa, with the help of David Evangelista, was getting ready.

She wore the opulent embroidery gown, which was the same dress viewers selected at home. In the tradition of weddings, the borrowed item were rose-cut diamond earrings that Kleinfeld's lent her from their Fine Jewelry collection.

The traditional Jewish canopy (known as the chuppa) was surrounded with flower arrangements designed especially by David Stark. On one side were Marc with his parents, Marc's best man and four other groomsmen. On the other side were Melissa's sister, Rebecca, who was the maid of honor and six other bridesmaids all wearing a dark, deep red wine-colored dress donated by Lazaro.

Melissa walked down the aisle accompanied by her father, Michael, and mother, Roni, as an instrumental version of the aria "Ombra Mai Fu" from Handel's opera Xerxes played in the background. Before them was an 8-year-old flower girl.

The ceremony concluded when the groom stepped on the glass, followed by a performance of "When I Fall In Love" by saxophonist Chris Botti and a champagne toast made by Marc Bell of Perrier Jouet, who supplied the bubbly.