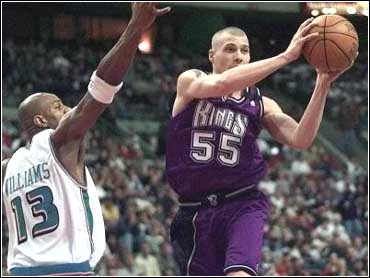 Chris Webber has spent much of his career playing outstanding basketball in the Detroit area. Rarely did he play as well as he did Wednesday night.

Then Webber, who grew up in Detroit and spent two years of college at the University of Michigan, went over and hugged his mom.

"It felt like I was back plqy)fg at PAL (Police Athletic League) with my mom in the stands," he said. "It didn't even seem like a game, just a lot of fun. I think I embarrassed my mom, though."

Webber missed his career high by just one point and added 11 rebounds. Jason Williams added 23 points and 11 assists for Sacramento.

"When Chris gets his jumper going like he did tonight, he's hard to stop," Williams said. "Call me biased, but I think he's the best player in the league. He had all his friends and family here, and he wanted to play well. I don't know if he can play any better than he did tonight."

The Kings are 3-3 on their eight-game road trip, which matches the longest in team history.

"This was a big win for us we needed to get back to .500 on the trip with Indiana and Philly coming up," Kings coach Rick Adelman said. "Jason and Webb were just unbelievable."

The Pistons trailed 109-101 with less than two minutes to play, but got within one in the final seconds.

Detroit, which has lost eight of nine, was without Grant Hill, who sat out for the fourth time in the last six games with a bruised lower back.

"When you are missing your best player, you are going to struggle," Pistons coach Alvin Gentry said. "That's exactly what is happening right now."

Detroit led 56-53 after a sloppy first half, thanks to 21 points from Stackhouse.

"You have to let Jason Williams take those shots, because he's a career 24 percent shooter from back there," Gentry said. "Most nights, he's not going to beat you from back there. He did tonight."

The up-tempo pace continued, thanks to Webber and Williams. They scored Sacramento's first 33 points of the third, 19 by Williams and 14 by Webber. No other King scored until Tyrone Corbin's jumper with a minute left.

"When I was coming at Lindsey, I thought he was backing up a bit, worrying about my penetration," Williams said. "So I just did what anybody would do I pulled up and took what the defense gave me."

Sacramento ended up outscoring the Pistons 37-25 in the period, including a 16-1 run to finish the period.

That gave them a 90-81 lead, and Webber made it an 11-point game with a basket to open the fourth.

The Pistons got within 95-90 with seven minutes left, but stalled there. They didn't get closer until two free throws by Stackhouse made it 105-101 with 2:40 left.

Webber scored the next four points from the line, but two Kings turnovers helped Detroit make it 109-104 with 1:13 left. Jerome Williams' put-back pulled the Pistons within three.

Williams missed a 3-pointer, and John Crotty was fouled on the rebound. His free throws made the score 109-108 with 23.8 seconds left.

Hunter tried a tying 3-pointer with two seconds left, but Webber blocked it.

"That play works a lot better with Grant Hill," Gentry said. "He drives to the basket and finds Terry or whoever is open. They didn't play it the same way without Grant in there."

Webber and his biggest fan were just glad it was over.

"My mom was really nervous at the end," he said. "But it was really good having family in the stands."