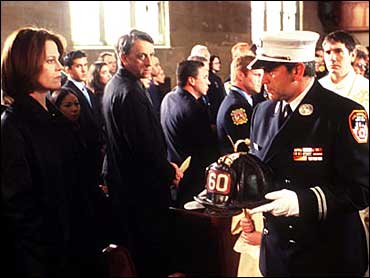 In the new film "The Guys", three time Academy Award nominee Sigourney Weaver plays a New York writer who helps a fire captain write eulogies for his men who lost their lives in the Sept. 11 attacks.

Weaver explained on The Early Show that the film was inspired by an off-off Broadway play written by journalist Anne Nelson. The play was loosely based on a fire captain and her own experiences in trying to make sense of the events and losses immediately after the attacks.

"It is a document of what it was like after 9-11, 10 days after," says Weaver. "And also a picture of what we can do for each other, even strangers in a time of crisis."

In the movie, New York City journalist Joan Nelson (Weaver) is called to help a fire captain (Anthony LaPaglia) write a series of eulogies for the men he lost at the World Trade Center. As the fireman begins to open up and work through his grief, the two form an unexpected bond.

"I think it would be wonderful for people to come in to a movie theater together and see this together," she says. "I think it's a very positive and precious experience, to be reminded of how strong we are as a community."

Weaver says the writer, Nelson, director of the international program at the Columbia University Graduate School of Journalism, had never written a play before. But Weaver's husband, Jim Simpson, who is founder of a small theater called The Flea, asked Nelson to write a workshop performance after he heard her tell about writing firemen eulogies.

A working mother, she wrote "The Guys" during the midnight hours in a little longer than a week. Two days after that, Simpson scheduled the one-act play for staging. Weaver and actor Bill Murray originated the play's two roles.

Weaver says the play and the movie are deeply personal because it hits close to home.

"It meant so much. I was born in New York and grew up here," says Weaver. "I think, like a lot of New Yorkers, you just wanted to do something to show your support, to help out in any way, and when I had the opportunity suddenly to do it through the theater, it was a great privilege, frankly, to be able to present this play to people. Because the community really needed it. And I think our community really does still."

Many firefighters and victims of Sept. 11 families had either seen the play either in New York or during its tour. Weaver says the response was positive wherever it has played.

"It was a very emotional atmosphere in the theater. Everyone came in with their own story about 9-11. Basically, and we took them through this," says Weaver. "When we talked about all four of these guys, I think it really brought them back to life for a lot of people."

Although time has passed since Sept. 11, many may find the topic still emotional, especially in today's atmosphere of war.

"I think we're in very troubled times. And I think that actually seeing something that addresses how people can help each other in a crisis is a very uplifting thing to be reminded of now," says Weaver. "The power we have to help each other, and to reach out to each other and to heal each other is really staggering. And it really was so clear in New York, and I'm sure in Washington, and all over the country after 9/11."

"The Guys" continues to run in a full production at The Flea. Actors have rotated playing the lead roles. Bill Murray's part has since been played by Bill Irwin, then by Anthony LaPaglia. Susan Sarandon performed in the play for a number of weeks, also playing opposite LaPaglia. Tim Robbins starred with Swoosie Kurtz. Tom Wopat, Amy Irving, Stephen Lang, Marlo Thomas and Carol Kane also performed in the play at various times.

Weaver will also star in the Disney movie, "Holes," which opens in April. "Holes" is based on the award-winning book by Louis Sacher. It is about a boy who suffers from a family curse of bad luck. He is sent to a mysterious camp run by "The Warden" (Weaver). In the feel-good movie, he eventually finds adventure and unlocks a secret that has been buried for years.

Some Facts About Sigourney Weaver