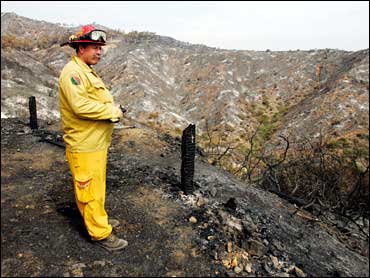 Officials said that the wildfire that had raced through the Okefenokee Swamp in southeast Georgia and into Florida had charred more than 233,700 acres — or about 365 square miles — since it was started by lightning a week ago.

Officials warned that storms in the forecast Sunday could bring either much-needed rain or lightning.

Authorities reopened 90 miles of Interstates 75 and 10 for a couple of hours Sunday morning after wind helped push the heavy smoke away from the highways. But they were later forced to close 35 miles of I-75 from the Florida-Georgia state line to Lake City, Fla., as well as a 40-mile stretch of I-10 in Florida, from Live Oak to Sanderson.

A 15-mile stretch of I-75 from Valdosta, Ga., to the Florida state line remained open Sunday.

About 570 residents were not being allowed to return to 150 homes evacuated between I-10 and the Florida-Georgia state line.

Firefighters working Saturday and through the night to control the blaze got help from previous prescribed burns near Lake City, Florida officials said.

"The fire burned into an area of the Osceola National Forest that had done a prescribed burn in the winter, so there was less fuel to burn," said C.J. Norvell, part of a joint federal-state forestry management team.

The fire started May 5 in the middle of the Okefenokee National Wildlife Refuge. It took just six days to grow larger than another wildfire that has burned nearly 121,000 acres of Georgia forest and swampland over more than three weeks. The small fire was started by a tree falling on a power line.

Haze from the fires had traveled as far south as the Miami area, about 340 miles away.

Cooler weather in southern California aided firefighters as they battled to surround a 4,200-acre wildfire in the rugged, unpopulated interior of Santa Catalina Island while a nearby resort town, no longer threatened, returned to life.

The fire was about two-thirds contained and was expected to be encircled by Tuesday evening, Los Angeles County Fire Capt. Andrew Olvera said. One home and six businesses burned Thursday but no one had been seriously injured.

Nearly 4,000 evacuated residents had started returning to the island, where damage was estimated at $2.1 million.

"We have a sense of duty to the town to bring it back to normal," delicatessen owner Rick Miller said as he unloaded supplies from his van. "People get hungry and it doesn't hurt to see businesses open and calm restored."

Fog and highs only in the 60s diminished the threat of the fire spreading. It was isolated in the back country of the 76-square-mile island, more than 20 miles off the Southern California coast.

The fire appeared to have been ignited by contractors working on antennas at a radio station in the island's interior, Avalon Fire Chief Steven Hoefs said.

Agresta said he saw a small blaze and ran inside the station to call 911. By the time he returned, it had moved several hundred feet downhill and engulfed the contractors' tool truck.

The fire started as firefighters were mopping up a more than 800-acre blaze in Los Angeles' Griffith Park. The park's famous Griffith Observatory and the Los Angeles Zoo reopened Saturday, but some areas of the park closer to the fire remain closed.

There's not much in Sunday's weather forecast that looks like it will help firefighters battling a wildfire near the Gunflint Trail, near the Canadian border.

A 40 percent chance of thunderstorms could bring some much-needed rain. But fire officials say the rain wouldn't help all that much — and they're more worried about predictions for wind gusts of up to 30 miles per hour.

Firefighters set a controlled burn yesterday to try to remove some of the fuel for the fire. They're hoping that will help protect structures on Gunflint Lake and Loon Lake.

Dozens of houses and cabins have been burned, and about 300 people had checked in at an evacuation center.