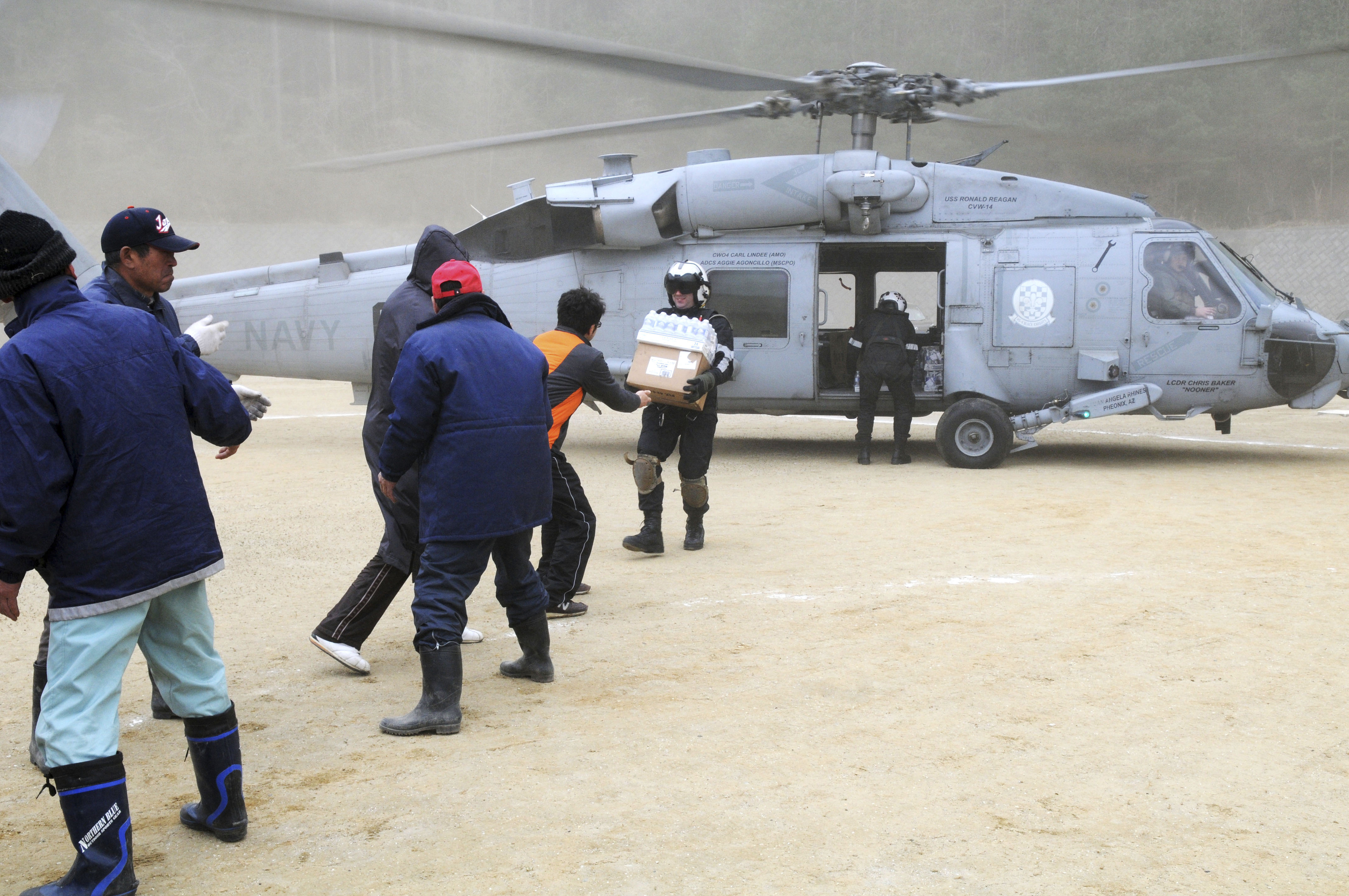 The Pentagon was sending more equipment to help Japanese control the crisis at its troubled Fukushima nuclear plant, but had not been asked to use its troops there.

Pilots couldn't fly helicopters off the deck of aircraft carrier USS Ronald Reagan until late afternoon Wednesday because of poor visibility. The 7th Fleet said that only 15 flights with relief supplies were launched from the eight-ship carrier group, about half as many as the 29 flights reported the previous day to deliver food, water, blankets and other supplies.

Several water pumps were being sent from U.S. bases around Japan to help at Fukushima's Dai-ichi power plant, where technicians were dousing the overheating nuclear reactors with seawater in a frantic effort to cool them. The U.S. had already sent two fire trucks to the area to be operated by Japanese firefighters, said Cmdr. Leslie Hull-Ryde, a Pentagon spokeswoman.

The Pentagon declared the area within 50 miles of the reactor a no-go zone in which pilots cannot fly without specific approval of the commander in charge of the operation, reports CBS News national security correspondent David Martin.

Japan's Chief Cabinet Secretary Yukio Edano says his government expects to ask the U.S. military for additional help. But Col. Dave Lapan, a Defense Department spokesman, said Wednesday that no request had been received yet.

U.S. military assistance so far has focused on delivering relief supplies and helping with logistics and search and rescue missions.

Pictures: Faces of the Japan crisis

The disaster at the nuclear plant on Japan's eastern coast has complicated relief efforts. The Ronald Reagan had to move Sunday out of the downwind path of the reactors after low levels of radiation were detected on the aircraft carrier and among 17 helicopter crew members returning to the deck after a mission.

More crews were exposed in flights Tuesday, prompting the Navy to give anti-radiation pills to what it said was a small number of people. The USS George Washington also detected radiation while sitting at pier in Yokosuka, and Americans at two bases in the area were advised to limit outdoor activities as much as possible.

And officials said they were rerouting an amphibious group to the Sea of Japan on the country's western coast to avoid the radiation issue and the debris carried out into the ocean by the tsunami. Some 2,200 sailors and Marines of the 31st Marine Expeditionary Unit are aboard the three-ship group led by the USS Essex and expected to arrive Thursday.

The military has said all exposures were very low doses of radiation.