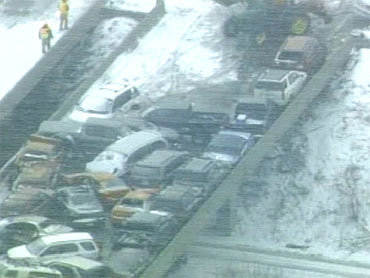 Highways have reopened in the Kansas City area after an afternoon snow squall caused dozens of accidents.

Dozens of weather-related crashes have shut down stretches of several highways in the area. The largest accident involved upwards of 40 vehicles in a massive pileup on Interstate 70.

The University of Kansas Hospital reported 15 people were transported to their hospital and five were admitted, most of them apparently from a second pileup on Interstate 35 involving more than 20 vehicles. None of those that were transported has serious injuries.

On northbound Interstate 35 at 87th Street in Lenexa, a multi-vehicle wreck shut down traffic. No serious injuries were reported. At least 20 vehicles were believed to be involved in the wreck.

Traffic was backed up as far as a mile and officials shut down the highway in both directions for several hours.

Two sets of accidents on I-435 near the Kansas River slowed traffic and wrecked at least five vehicles.