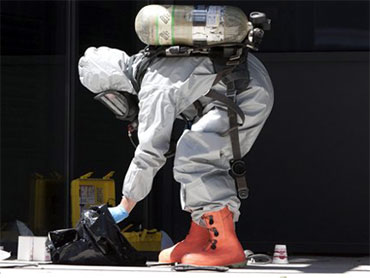 Police say they've made an arrest after searching a car and finding containers of gasoline and weapons near the G-20 summit site.

Police spokeswoman Nathalie Deschenes said Thursday there was an array of unspecified weapons in the car. A police hazardous unit is going through the car.

A chain saw, baseball bat and cross bow were found after police pulled it over. Police flagged the Hyundai Elantra after deeming it suspicious.

A large makeshift container was strapped to the roof of the car.

Smith also said the volume of fuel concerned them. Smith said the man will be questioned on why he had so many of the items and why he was in the area. He said charges are pending and the vehicle will be seized.

The car was pulled over a few blocks from where world leaders will meet, but not within the security perimeter. It was stopped near a hotel where the French delegation is staying. Workers at the hotel had walked off the job Thursday as part of a labor dispute.

Toronto's downtown core resembles a fortress with thousands of police. A big steel and concrete fence surrounds several blocks around the summit site. The G-8 summit starts Friday and the G-20 summit, which groups the leaders from 19 leading rich and developing nations, starts Saturday.

Police spokeswoman Jillian Van Acker said Thursday that Kristen Peterson, 37, has been charged with possession of an explosive device and possession of a weapon. Peterson's partner, computer security expert Byron Sonne, was charged Wednesday with several offenses, including possession of explosives, dangerous weapons and intimidating a justice system participant.

Jesse Hirsh, an internet activist and contributor to the Canadian Broadcasting Corp., said Sonne told a May meeting of activists and professors that he planned to monitor police chatter about the G-20 summit and post it on Twitter. He also said he would buy items online to attract police attention.

Officers armed with a search warrant went to the couple's million-dollar-plus home in a wealthy neighborhood in Toronto's north end on Tuesday. They charged Sonne and have now charged Peterson after searching two cottage homes in rural Ontario.

Van Acker said she couldn't say what the explosives are but said there is no risk to public safety. Police have declined to release more details, but said the investigation is part of the ongoing effort to ensure a safe and secure G-20 Summit.