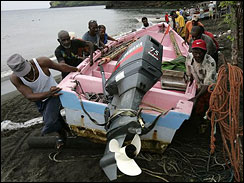 Jamaicans rushed to stock up on emergency supplies and officials urged coastal areas evacuated Friday as a slightly weakened Hurricane Emily churned toward the Caribbean island after ravaging Grenada.

Packing winds of 115 mph, the second major hurricane of the Atlantic season came unusually early and made its presence felt hundreds of miles away, unleashing heavy surf, gusty winds and torrential rains on islands both sides of the Caribbean sea.

The category 3 storm was nearly 400 miles southeast of Jamaica's capital and was moving westward at nearly 20 mph, with a turn toward the northwest expected to take it very close to Jamaica on Saturday, according to the National Hurricane Center in Miami.

Emily struck hard in Grenada, especially in the northern parishes of St. Patrick's and St. Andrew's and the outlying islands of Carriacou and Petit Martinique, authorities said.

Emily blasted out windows, flooded two hospitals and tore roofs from homes as it blew over Grenada and gathered force in the eastern Caribbean. At least one person was killed.

Emily's winds decreased to near 115 mph Friday afternoon after reaching a high of 135 mph earlier in the day, making it briefly what meteorologist Stacy Stewart called a "very rare Category 4 hurricane in the Caribbean Sea in the month of July."

After clearing the Windward Islands, the storm unleashes heavy surf, gusty winds and torrential rains on islands hundreds of miles away: Trinidad in the south, nearby Venezuela, to the west and Hispaniola in the middle of the Caribbean Sea.

A man in his 40s was killed when a landslide crushed his home in St. Andrew's, said Allen McGuire, Grenada's consul general in New York City.

Jamaicans formed long lines at grocery stores to stock up on water, canned food and batteries, only a week after doing the same for Hurricane Dennis, which washed away several homes, damaged crops and flooded roads.

Many islanders refused to seek shelter during Dennis, fearful of leaving their belongings unguarded.

"I'm hoping that those who are in these areas will heed the call to evacuate before it's too late," Transport and Works Minister Robert Pickersgill said on RJR radio.

Grenada, still recovering from the devastation of last year's Hurricane Ivan, declared a national disaster Friday, a day after Emily destroyed at least 16 homes, blasted out windows, sheared off roofs and flooded two hospitals and scores of other buildings.

The U.S. State Department issued a travel warning for Jamaica and the Cayman Islands, which were expected to get hit hard on Sunday, and authorized the departure of non-emergency staff at the U.S. Embassy.

The eye of the storm was projected to come within 40 miles of Grand Cayman Island on Sunday, the Cayman Islands government warned residents. Emily's next direct hit, according to the hurricane center's projections, was expected to be Mexico's Yucatan Peninsula late Sunday or early Monday.

In Grand Cayman, Texan Carolyn Parker, said she was more apprehensive than she's ever been in 20 years as a resident of the Cayman Islands. "Ivan was pretty nasty, and I'm scared to go through that again." said the retired police officer.

Emily trails Hurricane Dennis, which destroyed crops, killed at least 25 people in Haiti and 16 in Cuba and stranded thousands of Jamaicans when it collapsed a bridge last week.

Last year, three catastrophic hurricanes, Frances, Ivan and Jeanne, tore through the Caribbean with a collective ferocity not seen in years, causing hundreds of deaths and billions of dollars in damage.

The damage came as the island nation still was recovering from Ivan, which last year killed 39 people, left a wasteland of ruined buildings and damaged 90 percent of the historic Georgian buildings in the capital, St. George's.

The Organization of American States called an emergency meeting of its disaster committee Friday, expressing concern at the prospect of a "severe economic setback" to countries hit by hurricanes, especially Grenada.