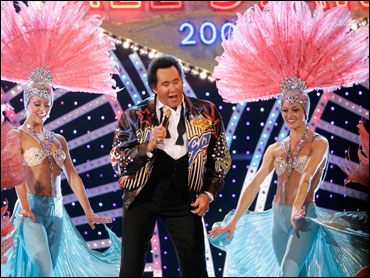 Wayne Newton is telling fans "Danke schoen" after 50 years in Las Vegas and hinting that his latest run could be his last. But the singer synonymous with Sin City says he's leaving himself an opening in case he wants to perform after April.

The man known throughout the world as "Mr. Las Vegas" says retirement is possible, but that decision won't hinge on the success of his new show that opened Wednesday night at the Tropicana Las Vegas hotel-casino on the Las Vegas Strip.

Instead, he says, it depends on whether his itch to keep working conflicts with his desire to spend more time with his 7-year-old daughter.

"I'm enjoying my second daughter in a way that I didn't get a chance to do the first time around," Newton, 67, told The Associated Press on Wednesday. "The decision that I make, whether or not to perform or retire, will pretty much be based on that."

Newton brought his second-grader home Wednesday night before heading to the Tropicana for the opening night of his latest show, "Once Before I Go."

The show, which Newton says took 2½ months to write, is presented as a live memoir of Newton's life and his career, with never-before-shared insights from Newton about personal episodes along the way.

"It's challenging to keep it entertaining," Newton said. "And that was my first prerequisite."

Wednesday night, Newton told stories about Dean Martin failing to rehearse for a TV duet, Elvis Presley writing a note that inspired the lyrics for "The Letter" and Bobby Darin fighting a publisher to let Newton record his signature tune "Danke Schoen."

Newton told the crowd that it was tough for him to pick highlight songs from a career that includes 165 records.

"It would be impossible for me to pick songs from all of them even if I remembered them, which I don't," Newton quipped.

As a youth, Newton and his family lived in Phoenix. Newton's Web site said he suffered from severe asthma and his family relocated to Phoenix from Virginia.

Newton arrived in Las Vegas in 1959, when a two-week tryout at the Fremont Hotel & Casino turned into lounge act of six shows per night, six nights a week for nearly a year. The crooner earned national fame after a 1962 television appearance on "The Jackie Gleason Show," which led to many more singing and acting gigs on TV and in film.

He also headlined at several casinos throughout Sin City, including the New Frontier, which hosted entertainers including Elvis Presley, Ronald Reagan and Siegfried & Roy over its 65 years. The casino was imploded in 2007.

"I've been working since I was four," Newton said. "There really has not been a time in my life that I don't remember working."

Newton said writing "Once Before I Go" has taken a toll on him and will likely be emotional to perform nightly.

"If I still feel like I have something to give when this particular show is over, then I'll make the decision to probably curtail work a little bit but not give it up totally," he told the AP. "If I don't feel that way at the end of this, then I'll probably hang it up."