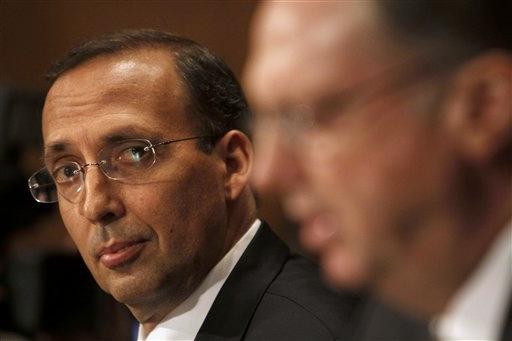 A statesman, a supermodel, an action star and a skier were among the vacationers whose search for some peace and sun in tropical southern Asia was ripped apart by the horror of the massive earthquake and tsunami waves that tore through the region, sparing neither rich nor poor in one of the world's worst natural disasters.

Czech supermodel Petra Nemcova — who appeared on the cover of 2003 Sports Illustrated swimsuit issue — was carried away with her British photographer boyfriend after a huge wave plowed into southern Thailand.

Nemcova, 25, clung to a tree for eight hours as the water swirled around her. She was recovering in a Thai hospital after suffering a shattered hip and unspecified internal injuries.

Her fashion photographer boyfriend, Simon Atlee, was swallowed by the raging waters and was still missing on Tuesday.

"It just seems horrific, like something out of a movie," said Atlee's agent, Eve Stoner.
Vacationing action star Jet Li injured his foot as he protected his daughter from tsunami waves that flooded his hotel in the Maldives, Hong Kong newspapers reported Tuesday.

Li, who played the villain in "Lethal Weapon 4," was with his daughter in the hotel's lobby Sunday when huge waves gushed into the hotel, the Apple Daily newspaper reported, quoting a friend vacationing with Li.

Li slightly injured his foot while picking up his daughter, the report said. Ming Pao Daily News reported Li struck his foot against a floating piece of furniture.

Former German Chancellor Helmut Kohl had taken a holiday in Sri Lanka's pristine south — one of the areas most devastated by tidal waves, which left more than 18,700 dead on the South Asian island.

Kohl was evacuated from a hotel by the Sri Lankan air force Tuesday with his entourage.

"The helicopter went and we managed to bring him back with six others," Commander Air Marshal Donald Perera told The Associated Press.

Swedish skiing great Ingemar Stenmark was sunbathing on a beach in Thailand when he saw an immense wave roaring to shore. He began running for his life.

Stenmark — who won two gold medals at the 1980 Olympics and 86 World Cup races — was with friends in Khok Kloi, about 30 miles from Phuket, the popular Thai tourist spot.

"The water from the first wave disappeared, but then it came back with terrifying speed," Stenmark told Swedish media. He and his girlfriend weren't injured.

Another athlete wasn't so lucky. Troy Broadbridge, an Australian Rules football player, was on his honeymoon in Phuket when both he and his new wife were hauled away by raging waters as they strolled along a beach. Trisha Broadbridge was safe, but the Australian Football League player was still missing.

The most powerful earthquake in 40 years and the massive waves it unleashed had killed at least 55,000 as of early Wednesday, and the death toll continued to climb.

Thailand's royal family was among the grieving. The Thai-American grandson of revered King Bhumipol Adulyadej, Poom Jensen, 21, was reportedly jet skiing when the tidal wave struck the famed resort of Phuket.

Hollywood actor-director Richard Attenborough's family also suffered tragedy. His granddaughter, Lucy, 14, perished and his daughter, Jane, and her mother-in-law remained missing in Phuket. Another granddaughter, Alice, 17, was being treated in a hospital.

Designer Nate Berkus — a regular contributor on "The Oprah Winfrey Show" — was carried away with a friend by a tsunami after it ripped off the roof of their hut in Sri Lanka.

They briefly clung to a telephone poll, but a second wave ripped them away. Berkus climbed to safety on the roof of a submerged home, but his friend disappeared into the raging sea.