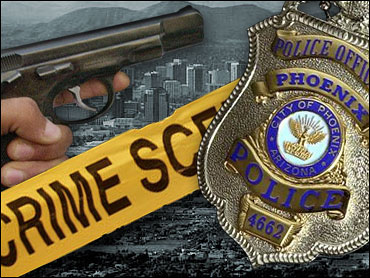 This summer, along with its usual heat wave, a crime wave is spreading through the Phoenix area. Nine murders, seven rapes and over 40 shootings in all has put residents on edge as police investigate the possibility of a third serial criminal on the loose.

Police believe 13 shootings since May, including two during the weekend that wounded two people, are connected, possibly making it the third series of shooting attacks in the city over the past year.

The most recent shootings follow 11 others that began on May 2, Sgt. Andy Hill said.

Detectives are not positive they all are linked but evidence and circumstances lead them to believe they are. The 13 shootings happened late in the evening or early in the morning, and most involved people walking or riding bicycles.

A task force of detectives already was trying to track down a serial killer, called the Baseline Rapist, they believe is responsible for five killings and a series of rapes and assaults that began in August.

Detectives are also investigating a series of at least 25 random shootings of animals and people in which several people have died since May 2005.

The incidents happened late in the evening or early in the morning, and most involved people walking or riding bicycles. Most happened along Camelback Road, Indian School Road, Van Buren Street or in the 44th Street area. Police believe the individual or individuals drive a vehicle, possibly a sedan, The Arizona Republic reported.

There's nothing to link the recent string of cases to the earlier serial crimes, Hill said.

So far, however, homicide detectives are still looking for leads, and are seeking the public's help. The criminals appear to be selecting victims at random, police say.

"At this point we have a very brazened, very difficult defender to locate," Sgt. Andy Hill, a Phoenix Police Department spokesman, told CBS News' The Early Show. "Although we do have the composite, we have not got that tip or break that would lead us to the suspect or suspects.

"We're spending a lot of time going to the public, talking about calling the police with suspicious activity and encouraging people to call silent witness if they have any witness as to who this might be."