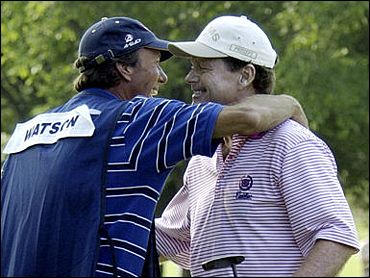 Tom Watson's eyes filled with tears as he walked to the final green. It was the first day of the U.S. Open, he shared the lead and the crowd's response was warm.

There also were personal issues on his mind and in his heart, all adding to the emotion of the day.

"Wonders never cease. You don't expect a 53-year-old golfer to be tied for the lead in the U.S. Open, do you?" Watson asked Thursday after his 5-under 65 gave him a share of the lead with Brett Quigley, who is 20 years younger.

Justin Leonard and Jay Don Blake were a stroke back, while defending champion Tiger Woods trailed by four strokes after an even-par 70 that included an eagle and two bogeys.

Watson turned back the clock at a tournament he won in 1982, and his round Thursday featured two shots for the ages.

The ball sat tantalizingly on the lip for several seconds before dropping, and Watson did a little jig before doffing his cap.

"When that ball fell in, that was something special," Watson said. "It stopped short and people were groaning. I'm walking up to it and said, 'That is so close, how could it not be in?' And then, hey, it went in."

The 7,190-yard North Course at Olympia Fields Country Club played easier than expected on the first day as players overcame narrow fairways, thick rough and deep bunkers. Greens are expected to be faster as the week progresses, but on the first day two dozen players broke par.

That made it the easiest first day of scoring in 10 years at the U.S. Open.

Can Watson keep it up? Be the player he once was for four straight rounds?

"I am the guy I used to be. I don't have to remember. Maybe it's just for one round, you never know. But let's find out after Sunday," he said.

Making Watson's day even more emotional was the caddie who recommended he use an old putter — Bruce Edwards, who in January was diagnosed with Lou Gehrig's disease.

"Bruce doesn't have a lot of time left. He knows the situation," Watson said.

Watson and Edwards have been together for most of the last 30 years and both were misty eyed as they neared the last green, remembering all the good times they've had, including the 1982 Open win.

"It was wonderful," Edwards said.

Quigley's caddie is his dad, Paul, and his presence helped him relax. So did watching tapes of old U.S. Opens.

"I like having him on the bag because it keeps me loose," said Quigley who returned to qualifying school last year and has missed the cuts in his only two other Opens.

He said watching players and their shots from U.S. Opens past demonstrated an important element to him: he can play well without worrying about being flawless.

"I was watching Golf Channel and they showed a bunch of old Opens and I was seeing a lot of guys hit bad shots," Quigley said. "It freed me up. I said I don't have to be perfect."

Blake is a real long shot. Not only has he missed the cut seven times in 11 previous Opens, he's battled back and elbow problems for years. And it's taken the 44-year-old a long time to get his swing in sync.

"I've been playing injured and kind of developed some bad habits. I've slowly been trying to get healthy," he said.

If the injuries had forced him away from golf, Blake has another interest to turn to because he attended National Hot Rod Association driving school in 1995. He still owns a car and does some racing.

"Golf being the frustrating game it is, it's nice to go out there and just stomp on the gas and go as fast as you can," he said.

"It's kind of a rush, a lot different from golf. But it's still fun."