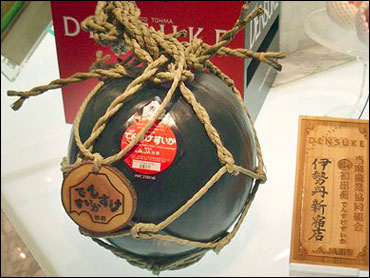 A black jumbo watermelon auctioned in northern Japan fetched a record $6,100 Friday, making it the most expensive watermelon ever sold in the country - and possibly the world.

The 17-pound premium Densuke watermelon, one of only 65 from the first harvest of the season, was purchased by a marine products dealer who said he wanted to support local agriculture, according to Kyodo News agency. The fruit is grown only on the northern island of Hokkaido.

In a country where melons are a luxury item commonly given as gifts, the watermelon's hefty price tag follows another jaw-dropping auction last month, where a pair of Yubari cantaloupe melons sold for a record $23,500.

But for watermelon, Friday's winning bid drew a gasp even from veterans of the expensive-fruit market.

"This is the highest price on record for a Densuke watermelon, and that probably means it's the highest of any watermelon in Japanese history," said Kazuyoshi Ohira, a spokesman for the Tohma Agricultural Cooperative in Hokkaido.

For seasonal, high-end fruits like the Densuke watermelon and the Yubari cantaloupes, Japanese buyers are often willing to pay top prices at auction for the prestige of owning the very first ones of the year.

Unseasonably warm weather in April and May have helped boost sugar content and overall quality, and consequently prices, of the 2008 watermelons, Ohira said.

The biggest watermelon of the day departed for Tokyo immediately after the auction in Asahikawa city. By midafternoon Friday, the 24-pounder had traveled some 500 miles south to Isetan, an upscale department store in the capital, where it went on sale for $5,945.

Other Densuke watermelons won't cost quite as much. Most will retail at department stores and supermarkets for a more modest $188 to $283, Ohira said.

Its unusual black skin, Ohira said. Inside, the watermelon is crisp and hard. And, he says, it has unparalleled taste.

"It's a watermelon, but it's not the same," he said. "It has a different level of sweetness."

Jun Otsuki, a spokesman for Guinness World Records' Tokyo office, said his organization does not keep records of any sort on watermelons.

Arc de Triomphe to be wrapped in fabric for $16.4 million art project