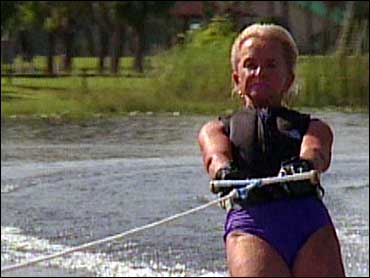 If you were to see the latest water-skiing phenom, you'd notice right away that she's strong, quick and pretty much fearless, CBS News correspondent Steve Hartman reports. But what you surely wouldn't see as she rides the waves is that this champion is also on Social Security.

"What did you want, me to wear bloomers?!," she says, flaunting her bathing suit.

Obviously, Grandma Walton she is not. Her name is Frances Woofenden, and about five days a week, you'll find her showboating across Okeeheelee Lake in West Palm Beach, Fla.

Believe it or not, Frances used to be a fairly typical grandma. In fact, she didn't try skiing until she was 50. Now she competes and has so many medals she can barely lug them all, and is No. 1 in her age group.

Of course, it begs the question of who else is in her age group.

"That's the trouble right now," Frances says. "There aren't many." She's pretty much the entire division.

Frances is starving for anyone to compete with, so Hartman took the challenge, only to wipe out before the first buoy.

Hartman's reaction: "I still say I could beat you at shuffleboard."