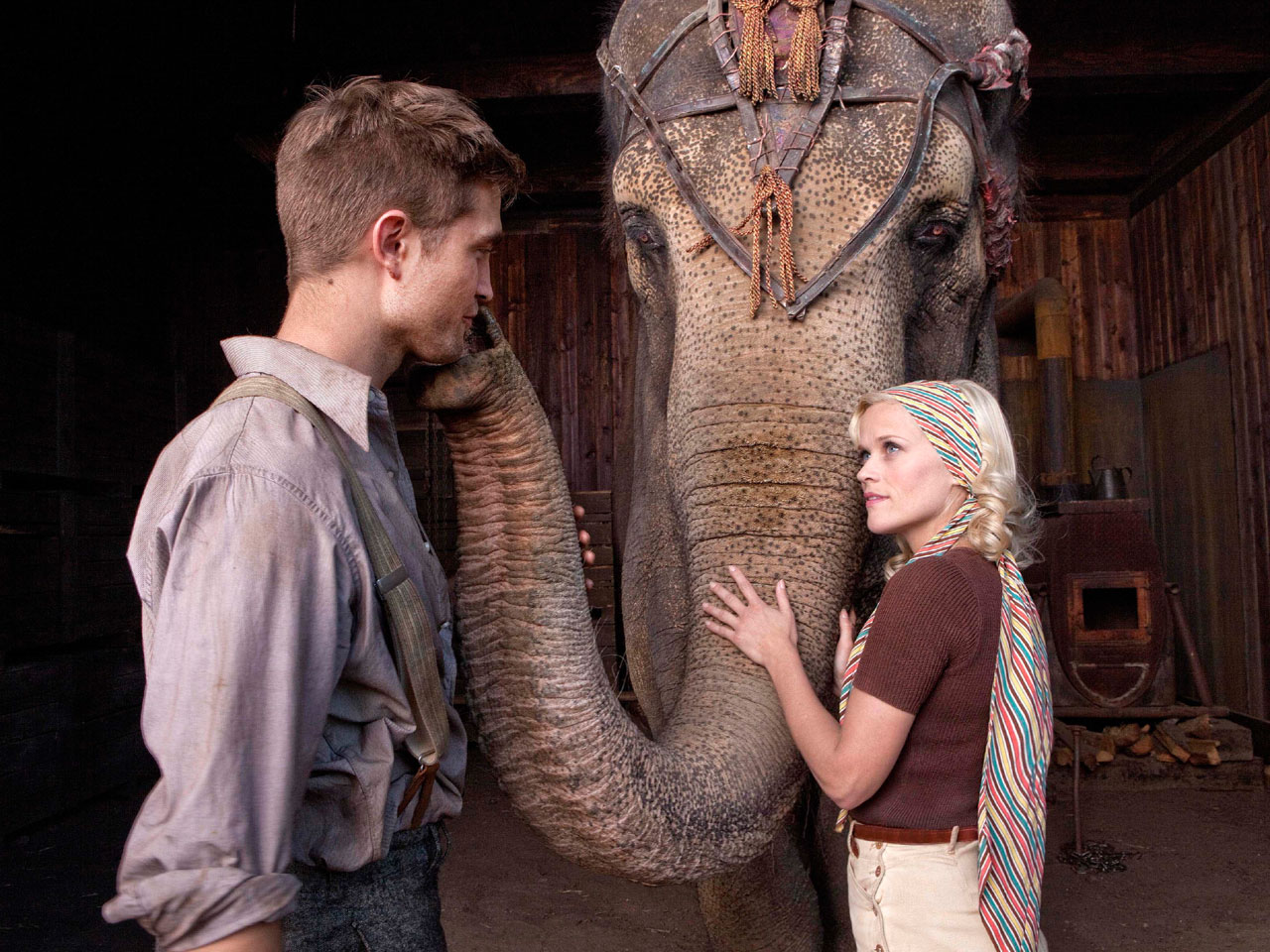 (CBS) Based on Sara Gruen's bestseller, "Water for Elephants" brings to life a rich cinematic experience, flavored with the romance and excitement of a bygone Hollywood era.

Visually captivating, director Francis Lawrence ("I am Legend") succeeds in bringing all the allure and the spectacle of the big top to the big screen. He's helped in large by unparalleled imagery from master cinematographer Rodrigo Prietoa and a first class screenplay courtesy of Richard LaGravenese, which while staying true to the book, allows the three principle characters the room to breathe and develop. Add into the mix an all star cast, including Robert Pattinson ("Twilight") and Oscar-winners Reese Witherspoon ("Walk the Line") and Christoph Waltz ("Inglorious Basterds"), and all the conditions are right for creating the kind of quintessential Hollywood epic love story we haven't seen for quite some time.

Set during the Great Depression and Prohibition, the film revolves around the 1931 Benzini Bros traveling circus. In the shadows of their Ringling Bros. competition, the show, owned and operated by Waltz's character, August, is struggling to keep from going belly up like many of its predecessors.

LaGravenese's screenplay opens with 93-year-old Jacob (Hal Holbrook) standing in the rain, having shaken the nursing home he has been languishing in just long enough to make it to where a modern day circus has pitched its tent, before unraveling his connection to the carnival in flashback.

Young Jacob Jankowski (Pattinson) is a handsome Cornell University student, whose dream of becoming a veterinarian comes to a screeching halt when his working class parents are killed in a road accident. Penniless, Jankowki hops a freight train that takes him on the journey of a lifetime with Benzini's "Most Spectacular Show on Earth."

Camel (Jim Norton) takes Jacob under his wing and shows him the ins, outs and strict hierarchy of life in the circus. He also introduces him to August, a maniacal pariah of a boss and the show's ringmaster. Self-absorbed and a dictator, he will do whatever it takes to keep his star-attraction wife, Marlena (Witherspoon), and her animal act running.

Jacob learns quickly how to make himself indispensable, landing the job of chief vet to the circus animals and a place in August's inner circle, as well as Marlena's heart. As the latter spends time with Jacob, who tends to her seriously ill horse (the other half of her star act) the two begin to develop feelings for one another. A risky dalliance, to say the least, with Marlena's mercurial, violent-tempered husband always hovering.

Pattinson trades in the glistening complexion and morose personality traits of his "Twilight" character for a more gentrified (albeit only slightly less pouty) character portrayal. Still gorgeous to look at, Pattinson does manage to make us stop and concentrate on his acting long enough to make him believable in his role as a love-struck veterinarian in love with the boss' wife. With this role, he turns a corner, transforming himself into a full-fledged Hollywood leading man.

Still, something is missing from his performance. That spark isn't there, which in a burning love story can present some problems. Thank goodness for the careful attention paid to bringing the antics of the side shows and the animals to life, which help deflect from the reality that there is very little chemistry in this love story.

Witherspoon is talented and turns in a good performance as the commoner who goes through the school of hard knocks. She's tough, a little rougher around the edges for having stayed with her oftentimes abusive husband, but LaGravenese's script doesn't give her character as much room to grow as the others. As a result, she flexes more muscle in her acrobatic routine than in showing off her acting prowess. And Pattinson just seems to hold back.

The two real stars of the show vie for attention and some of the best scenes involve them both - Rosie, a 9000 lb elephant and her new owner, August. As the show's magnetic owner and animal trainer, Waltz outshines himself in a role that was tailor-made to play to his strengths - a with character not all that dissimilar to the one he portrayed for his Oscar-winning performance in "Inglorious Basterds."

One easily forgives the accent and trying to figure out where he comes from, in what is actually an amalgamation of two characters from the book. He acts savagely sadistic towards both the animals and the people who work for him, but at other times is humorous and giving. August is the most compelling character in the film and provides the necessary spark to keep this carnival act from fizzling. One scene, when he brutally beats his newly acquired pachyderm into submission is extremely difficult to watch, though the film has been given a PG-13 rating.

Overall, the entertainment narrative of the big top keeps the film from feeling weighed down to the point of collapsing the tent, however melodrama does abound and it is no secret which way the film is going by the time the last act rolls round. Still, a breathtaking climax proves to be a real showstopper that will make audiences take the circus seriously.