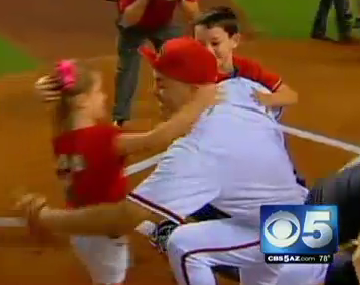 (CBS News) The Arizona Diamondbacks lost at home to the St. Louis Cardinals Monday night but for the Aguirre family, it was a homecoming to remember.

As CBS affiliate KPHO reports, the family has come to every Diamondbacks home opener for years but the tradition was broken this season. That's because Lt. Col. Paul Aguirre has been serving in Kandahar, Afghanistan with the Arizona National Guard for the past eight months. His children - 6-year-old Jackson and 5-year-old Alanna - were told he would finally be returning home at the end of this week.

On Monday night at Chase Field, Aguirre delivered a pre-game message to his kids on the stadium's giant video screen, telling them he loved them and promising to be home from Afghanistan in a few days. But in reality, Aguirre was not in military fatigues thousands of miles away - he was in a Diamondbacks uniform just a few feet away.

After the video message, Jackson and Alanna were invited to throw out first pitches to the Diamondbacks catcher at home plate. Little did they know the man behind the catcher's mask was actually their dad. As the children walked toward home plate, they embraced their father in a tearful reunion as the 26,447 fans in attendance applauded.

Said Paul: "When I started walking out there, I was welling up with emotion."